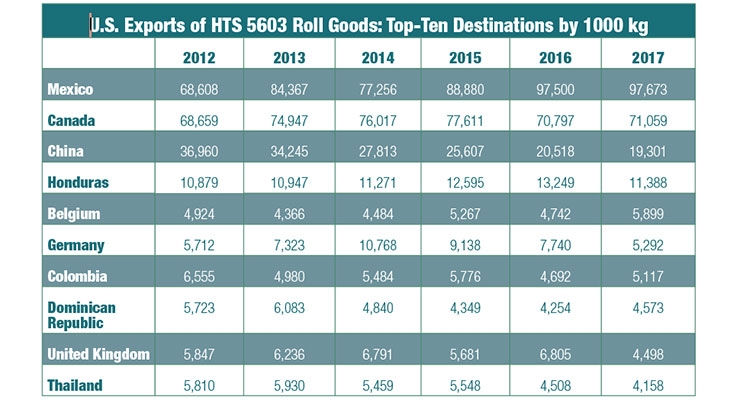 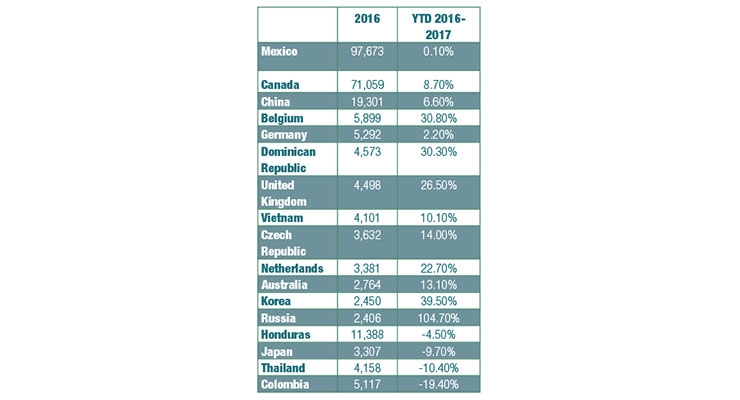 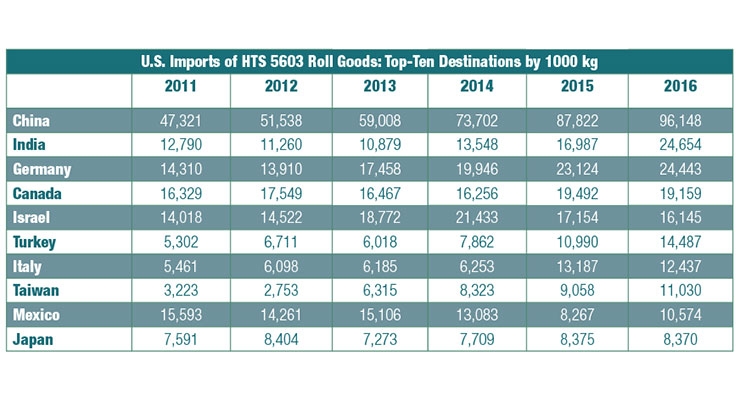 According to data released by the U.S. International Trade Commission (USITC) based on tariff information and trade reporting, U.S. exports of nonwoven roll goods – as characterized under Harmonized Tariff Schedule (HTS) category number 5603 – slipped to about 285 million kg in 2016 compared to nearly 297 kg in 2011 – a decline of roughly 4%. This while U.S. imports over the same period climbed from 190 million kg in 2011 to just over 300 million kg in 2016 – better than 50% growth.

While these numbers will likely be adjusted by USITC in the coming months, up or down, this is the first time in industry existence that imports of nonwoven roll goods to the U.S., as measured in kg, has exceeded the amount of exports from the U.S. ever.

Reporting on import/export statistics for nonwoven roll goods has historically been an annual topic in this column and the headlines have often noted the lopsided percentage by which U.S. exports reigned over imports coming from other countries. More recently, however, especially during the past five years, this gap has narrowed annually. But even though it’s a small advantage for 2016 – 300 million kg imported versus 285 million kg exported – it may be a harbinger of things to come.

According to the data, U.S. exports of nonwoven roll goods were shipped to 107 different countries in 2011 whereas 126 countries received U.S. exports in 2016. Thirty of these “new” destinations for 2016 took single-digit amounts of U.S. exports, however, and 25 other countries took only double-digit amounts. Most U.S. exports – 169 million kg out of 285 million – remained inside North America last year but, U.S. exports to Mexico have risen far more dramatically than those to Canada.

Five countries—Uganda, Kyrgyzstan, Turkmenistan, Tajikistan and Uzbekistan – took in some amount of nonwoven roll goods (typically very small) for the first time in 2016 while U.S. exports to China declined significantly between 2011 and 2016. Exports to Honduras, Germany, the U.K. and Thailand also fell from 2015 to 2016.

As the table to the left indicates, of the 17 countries that received at least one million kg of U.S. exports in 2016, YTD percentage comparisons for 2017 – so far – have increased with 13 countries while losses are reported with four others.

Compared to 2011, U.S. exports sent to Mexico, Belgium, Czech Republic  and the Netherlands have seen the greatest gains over the past five years. Moreover, during that same period, exports to Russia increased nearly fivefold while those sent to
Vietnam went up nearly fourfold.

Turning to imports, the big story is China, but India and Germany have also made dramatic increases in the amount of nonwoven roll goods shipped to the U.S. over the past five years. As the table below indicates, imports from China doubled from 48 million kg in 2011 to just over 96 million kg last year. Similarly, imports from India also nearly doubled over the same period (growing from about 13 million kg to just under 25 million) while those from Germany grew by more than 10 million kg.

One eyebrow-raising aspect of this table is that nine out of 10 of the biggest exporters to the U.S. market have significantly increased the amount of product they shipped during the past five years. U.S. imports from Turkey, Taiwan, and Italy have been especially impressive while U.S. imports from Mexico have dropped by about 30%.
Related Searches
Related Knowledge Center
Suggested For You

Absorbent Article Having a Folded Waist:

Consumer Wipes Market in U.S. to Grow 2.5% Per Year