After a decade of intense research and development, pilot scale production has begun. 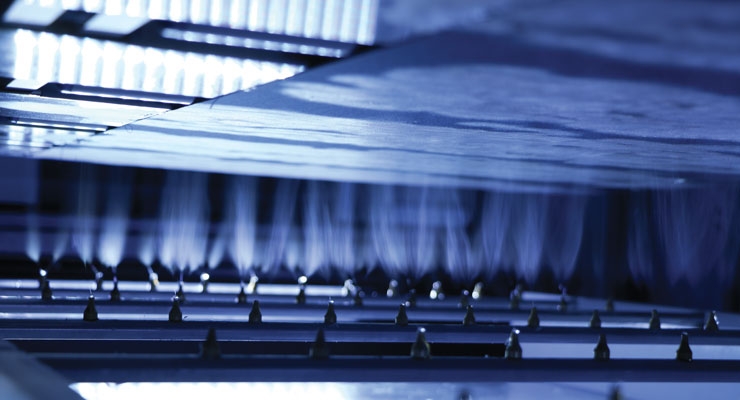 Inovenso PilotLine and the close up view of spinning zone. 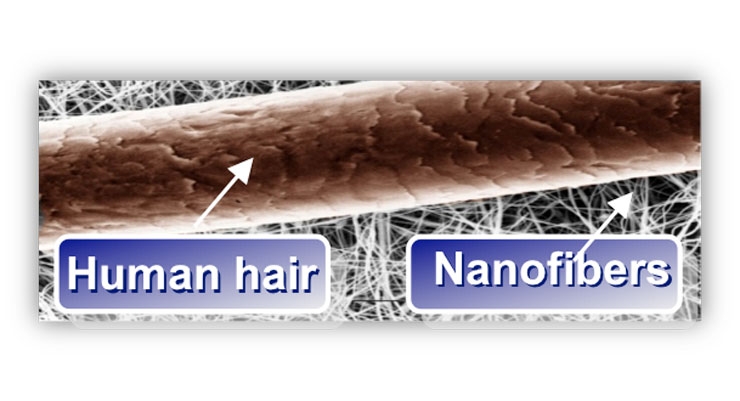 Figure 1: Dimensional comparison of conventional fibers with a nanofiber. 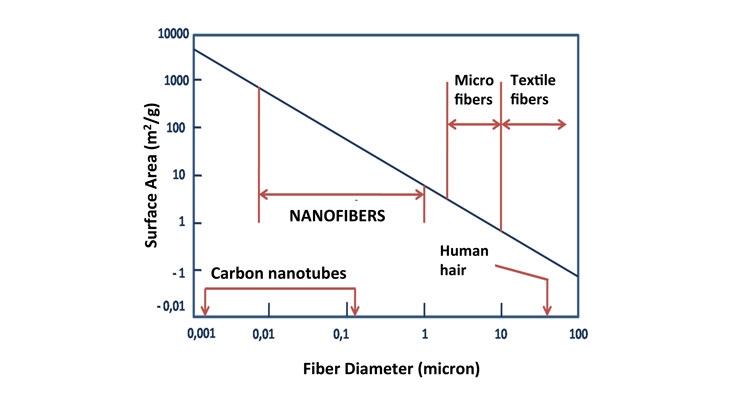 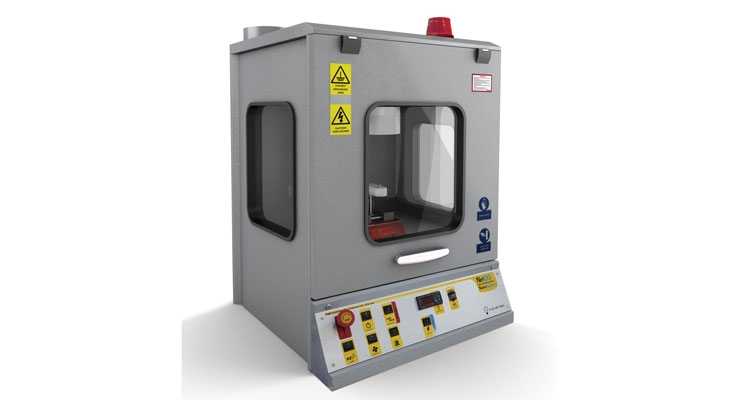 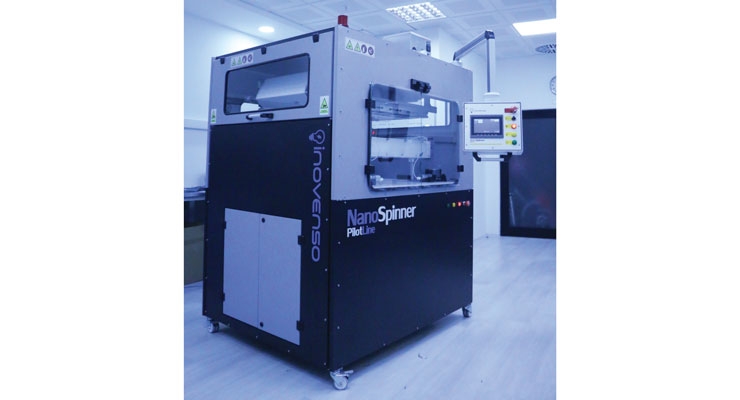 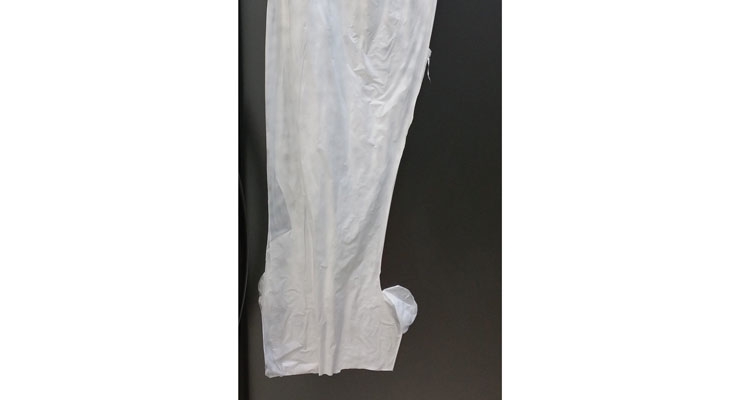 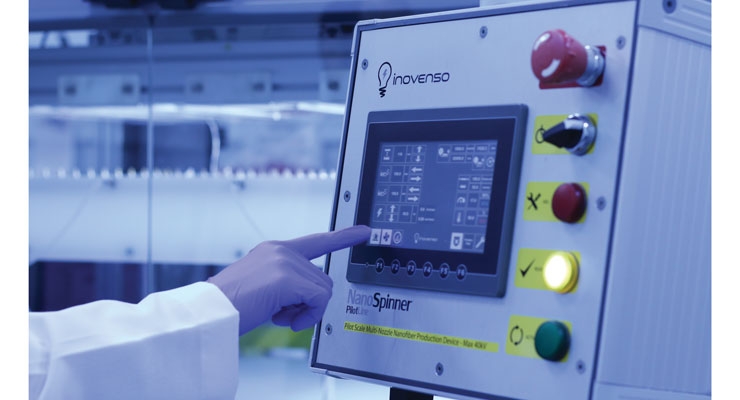 Figure 6: The touch screen control panel of the automation system

The pioneering research and development name (Inovenso Ltd. Co. www.inovenso.com) in the field of electrospinning has now announced its pilot equipment with a web with of 60 cm and a production figure of 84 m/min at 0.5 gsm suitable for most of the filtration applications. Specifically, the nanofiber production capacity for Inovenso PilotLine with PAN/DMF at a 13% concentration solution is 21 grams/hour. Depending on the weight (gsm) of the nanoweb, the nanofiber coating thickness, nanofiber coated membrane capacity per hour can be calculated. For example for 0.5 gsm nanofiber thickness and 60 cm coating width, the capacity is 84 meters/hour which has only been a dream so far.

As the fiber diameter decreases, the volume that it occupies in the space increases creating a high surface area/weight ratio which is utmost essential for filtration, wound dressing, drug delivery as well as separation media for batteries. Figure 2 explains the fiber diameter-surface area relationship.

Such small diameter fibers require special production techniques. The conventional melt spinning technology has achieved micro-fiber spinning with a diameter of 1-10 micron (20.000 nanometer). However, bi-component melt spinning has resulted in fine fiber diameters such as 300 nm developed by Hills Inc. producing fibers with up to 1000 islands with a patented spinneret and melt distribution system at melt spinning process[1].

The nanofibers produced by electrospinning or in fact by any other spinning techniques so far developed are so fine and tiny that it is extremely difficult if not impossible to handle them as a single fiber. Therefore they are accumulated as webs called nanofiber webs in a similar fashion to spunbonding and/or meltblowing processes. Nanofiber webs may be collected on static metal plates or frames as well as moving media such as woven or knitted fabrics as well as nonwoven surfaces. Due to the fact that the main function of these auxiliary surfaces is to carry the delicate nanofiber webs they are called as substrates or carriers. For some applications the substrates may be an integral part of the filter media while for some other applications such as wound dressing, drug delivery or battery separators, the nanofiber web is used as it is.

The Electrospinning
Although the first patent has been granted in the 1950s on fiber spinning by electro-hydrodynamic forces, until the 1990s no further research interest has been observed. With the increasing interest on nanotechnology, the researchers have started re-visiting the old patent literature and have realized that if a polymer solution or melt is subjected to high electrical field forces, they tend to extend, elongate and then form a jet of solvent and polymer, and finally by the evaporation of the solvent the polymer flow starts to whip and spin until it reaches to the collector where polymer is now in the form of a fiber with nanometer scale diameters, i.e. forming nanofibers. This simple to set up system is named as electrospinning and due to its simplicity and favorable economics, it has gathered tremendous interest form academia. Today more than 3000 scientific papers are being published annually all over the world.

The electrospinning set up is so simple that only a high voltage power supply is necessary. Any laboratory technician can easily devise all the other necessary items for the systems such as polymer feeding, needle and collector. On the other hand many different laboratory equipment can also easily be reached from equipment suppliers. Figure 3 shows three different version of electrospinning equipment readily available from Inovenso [2] one of such equipment suppliers.

Despite this overwhelmingly simple set up, the production capacities are also similarly simple i.e., small. It is due to this fact that the electrospinning has stayed in the laboratories for such a long time. But it now seems that this technology is running towards industrial production.

With the current configuration, the Inovenso needle type electrospinning is ejecting nanofibers from the needle tips onto the substrate place above the needles. By this arrangement, two advantages are achieved: On the one hand, nearly perfect needle tip droplets are formed without the adverse influence of gravity hence the continuous and regular spinning is guaranteed. On the other hand, any accidental solvent dropping on the nanofiber web is securely avoided. The so called “spinning distance,” the distance between the needle tip to the collector may be steplessly adjusted by a touch of a button on the touch screen control panel. The adjustment of the spinning distance may also be realized during the nanofiber production process. This enables the adjustment of the nanofiber diameter while spinning. It may seem to be of no benefit for most of the applications nevertheless for certain “custom designed products” such as face masks as some areas may require differing nanofiber diameters than other sections. Such a requirement may be met by adjusting the spinning distance. The automation system of Inovenso may also be so programmed that the spinning distance varied automatically according to the design requirements of the end product. The touch screen control panel of the automation system is shown in Figure 6. Such programming may also be extended to other electrospinning process parameters such as the voltage of the high voltage power supply, the amount of polymer solution feed rate and the linear speed of the collector.

The areal distances between the needles are such optimized that they do not affect each other as far as the electrical field and the whipping motion typical to electrospinning are concerned. This areal distances optimization also secures a homogenous nanoweb formation. The polymer solution feeding system is so arranged and manufactured that all needles deliver the solution at the same time enabling homogenous polymer delivery in time. It also has to be mentioned that the needles of Inovenso are specifically designed and developed for optimum electrospinning; this feature is an obvious contrast to many other electrospinning equipment manufacturers using standard medical hypodermic needles. The mini-pool on the top of the needle has two essential functions; firstly it forms a large bubble so that many polymer jets may be ejected to deliver high amount of nanofiber, secondly it forms a solid plug when the process is paused so that the mini-ball may be removed to open up the polymer duct easily to re-start production. The outer surface of the purpose-designed needle does not allow the accumulation of the polymer solution and also allows easy cleaning.

The large nanofiber collecting area opens up many opportunities for differing end uses ranging from air, gas and even water filtration to medical products such as wound dressings and wound care to energy storage by super capacitors as well as Li/Na-Ion capacitors. It is claimed by Inovenso that the homogeneity of the nanoweb in both CD (cross direction) and MD (machine running direction) is quite well suited for most of the end uses.

Despite the fact that the Pilot machine has been designed and manufactured for product development, it is also well suited for research. A double feeding pump allows it to feed two distinct solutions to produce two layers of nanowebs composed of different polymeric nanofibers.

Concluding Remarks
With such a pilot machine, it is now possible to produce mass amounts of nanowebs to be used for many end use applications. This has been regarded as a major development step in nanofiber manufacturing by electrospinning.
Related Searches
Suggested For You 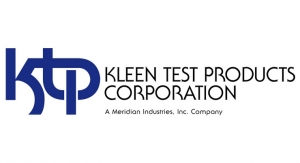 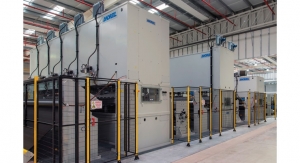