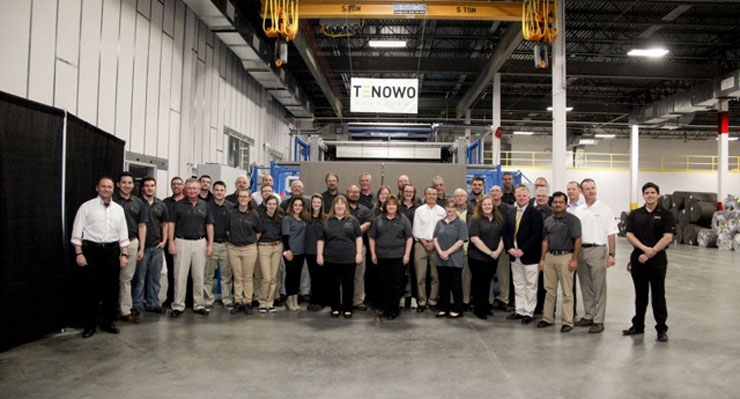 Tenowo, Inc., a Hoftex Group AG business and manufacturer of engineered nonwovens, celebrated the grand opening of its expanded plant in the Indian Creek Industrial Park in Lincolnton, NC in late March. The expansion involved the addition of a new 70,000 square foot building and the installation of a new production line.

The Lincolnton facility was founded in 1992 and is a leading producer of decorative and functional nonwovens for the automotive, industrial and apparel industries.  The latest expansion involved a total investment of $10 million and is the fourth at this location since 2009.  Overall, Tenowo has invested $20 million in the expansion of existing production capabilities and the installation of new manufacturing technologies at the site.

The new production line involved the transfer of Tenowo’s unique Multiknit technology from Germany to the U.S. and is the only production capability of its kind in North America.  Multiknit products are primarily used in automotive seating applications and offer several advantages over conventional products, including enhanced breathability and improved temperature regulation.

“Our parent company, Hoftex Group AG, continues to invest in the site and support our growth. The board of directors of Tenowo Inc. and our ownership believe in the team here in Lincolnton and that is a powerful motivator.  They also believe in the institutions of this area and their ability to support us,” states Chris Peart, President and CEO of Tenowo, Inc.  “In particular, the support of the Lincoln Economic Development Association (LEDA), Lincoln County and the state of North Carolina was critical to moving forward."

Harald Stini, the Global Managing Director for Tenowo spoke at the event. “This was a flagship project for Tenowo. It was a great example of an international group of people with different skills working as a team to complete a project on time, within budget and with the highest quality standards. The team and the project reflect our corporate values and guiding principles: trust, fairness, collaboration and cooperation.”

Klaus Steger, CEO of the Hoftex Group AG, spoke on behalf of the ownership and then cut the ceremonial ribbon.  “We are proud of the success of Tenowo and stand behind the team, whose work and ingenuity, along with the support of Lincoln County, were essential to the successful completion of this project. I plan to convey the dedication of the employees here and the inspiration of this event to the Hoftex Group Board of Directors.  As a result, we may see further investments come here even faster than was originally planned.”

The first commercial production for the new machine occurred during the first week of January 2017.