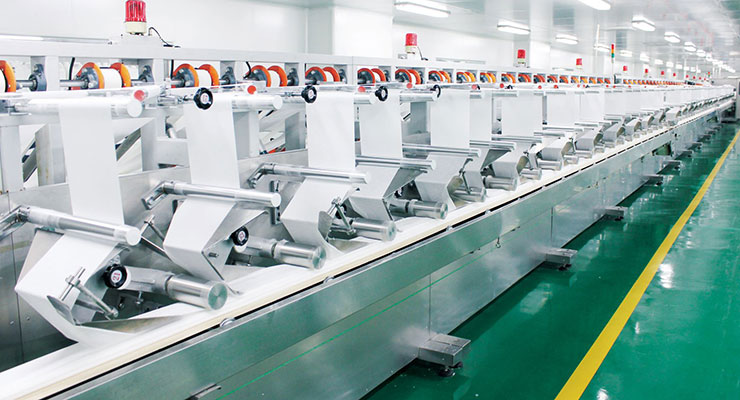 Production of wipes and wipes substrates is a top priority at Kingsafe. 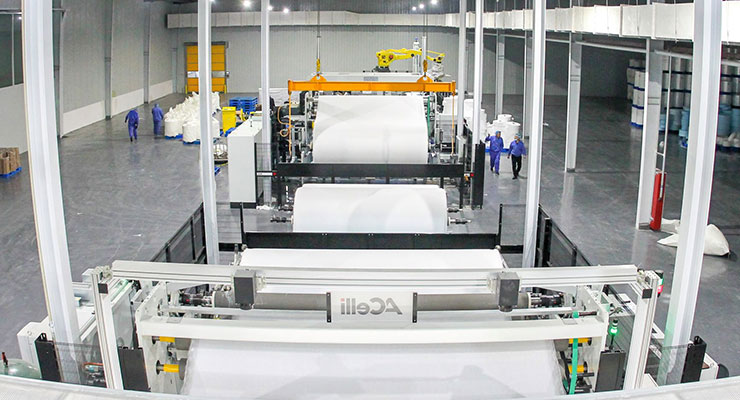 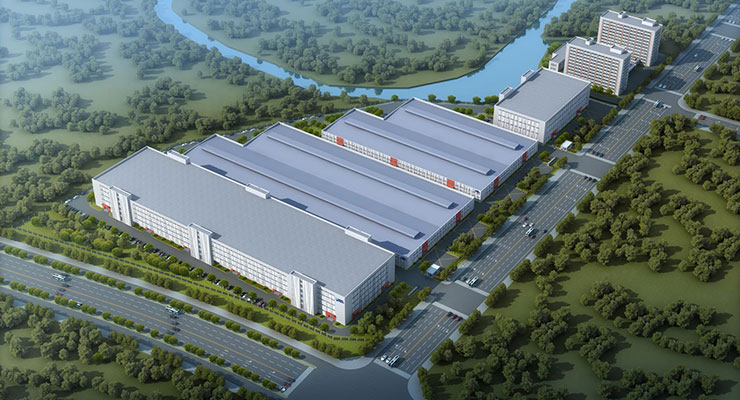 The year 2020 has been an extraordinary year for the world and China. The same goes for Kingsafe. In 2020, Kingsafe tripled the sales of spunbond nonwovens. Meanwhile its spunlace business increased by more than 150%, and sales of wipes (OEM) is estimated to reach over RMB800 million. Yan Huarong, chairman of Kingsafe Group, tells us that they will focus on its wipes business and spunlace manufacturing.

In recent years, Kingsafe has stepped into an accelerated development pace with product portfolio and footprint expansion, which has drawn great interest across the value chain.

Statistics show in 2017, Kingsafe generated $385 million (RMB 2687.3 million) revenues with just below 81,000 tons annual production capacity. Three years later, in July 2020, the annual capacity was increased to beyond 300,000 tons, and its wipes business alone generated revenues of RMB800 million. People may wonder why and how this happened in such a short period?

Talking with the Data
Kingsafe started its business with manufacturing garment fusible interlinings three decades ago, and today, its interlining business continues to be one of the company’s three major businesses. The other two are nonwovens and wipes. As the market has matured, the growth rate of the fusible interlinings business has slowed down to about 10% every year, with sales currently around RMB400 million. The company hopes to keep this business steady by focusing on high quality in the future.

Kingsafe’s roll goods business can be categorized into four areas—spunlace, spunbond, air through and absorbent cotton. Among these, the spunlace business is growing the most quickly, with an annual capacity of 220,000 tons on 19 lines. The spunbond business, meanwhile, comprises 10 lines, which produce 80,000 tons of roll goods each year. One of the spunbond lines is a 3.2 meter SSMMS line while the others are SMS lines. The company’s two air through lines produce 6000 tons of roll goods per year, and the annual capacity of the absorbent cotton production line is 4000 tons.

Looking ahead, Kingsafe will complete a second phase of facility construction in Huzhou, China, which will allow it to make 10,000 tons of absorbent cotton materials per year. Kingsafe also has plans to establish production plants in Guangdong, Chongqing, Tianjin and Wuhan, all in China.

According to Huarong, chairman of Kingsafe, the company’s strategy is growing with high-efficiency and high-quality materials based on high capacity and focusing on the wipes business and spunlace manufacturing.

With decades of “ploughing and weeding” in the nonwovens industry, Kingsafe has a clear and unique understanding of the nonwovens industry, which turns into a sharpened capability in finding and catching the key industry development trends and opportunities. Just in one year, Kingsafe introduced seven new lines, including four spunlace lines and two spunbond lines—all of which are large imported lines—as well as another absorbent cotton production line.

The sudden outbreak of Covid-19 dramatically increased the demand of medical protective goods. In order to help ease the desperately short supply of masks in China in early 2020, Kingsafe remodeled its existing three SMS spunbond-meltblown lines and shifted them all into meltblown nonwovens production. As soon as the situation got under control in China, and the number of overseas cases began increasing, Kingsafe shifted its SSMMS and SMS production lines to manufacture nonwovens for protective garments. Its maximum monthly capacity climbed to 70 tons of product, which were all exported to overseas markets.

Investments
Today, wipes in the market can be classified mainly as baby wipes, adult wipes and hospital disinfection wipes, with baby dry wipes and adult dry wipes developing quickly. “We see more and more consumers recognizing the advantages of wipes and using them as daily necessities,” Huarong notes. “Meanwhile, as the volume of wipes keeps increasing, the price decreased 2/3 compared to five years ago, and the cost is expected to drop further in the future.”

From the perspective of the overseas market, except Turkey, which still has few new spunlace lines installed, the nonwovens industry developed very slowly in rest of the world including Europe, the U.S. and Japan. Korea has a small nonwovens industry but consumes a huge number of wipes, accounting for nearly a quarter of nonwovens exported from China.

With clear insight and confidence in the growth prospects for the wipes market, in 2019, seven new lines were installed at Kingsafe. Six of these are big imported lines. “We import these lines because of the high capacity, which is about several times of local lines, a very important factor to compete in the booming wipe market,” Huarong explains.

In 2020, Kingsafe sold more than four times the amount of spunbonded nonwovens and 2.5 times of spunlace nonwovens compared to the year before. “Recently, we delivered about 200 containers to a customer in the U.S. each month, all these nonwovens will be processed as disinfectant wipes,” Huarong says. “No matter what kind of wipes customers ask, we can provide the corresponding nonwovens and wipes with quality and quantity guaranteed. In 2020, we provided RMB 800 million wipes as an OEM. “

Shift of Manufacturing Chain?
At a time when political tensions are escalating—plus the supply chain disruption as the result of pandemic—many people are talking about the industrial value chain being shifted from China to other countries and regions.

According to Huarong, it is unlikely that the industrial value chain will be moved to other countries or regions with the momentum that China has grown in the global wipes market center. “China has the most complete supporting facilities with obvious advantages. First, we offer 80% of global polyester fibers, almost all fibers are manufactured in China, with unparalleled price and supply capacity advantages,” he says. “Secondly, China is a large nonwoven manufacturing country. Thirdly, wipe production equipment has been highly localized and automated, the production and packaging of wipes is very efficient, production cost reduced significantly. The production of wipes as final product in China is a natural choice, and the price would be cut further in the future. “

Accelerating the Development
Huarong points out that the consumption of all kinds of wipes will continue to grow after Covid-19. With this perception in mind, Kingsafe decided to increase investment in spunlace lines.

One example is, after the recent acquisition of Nantong Weier Nonwovens New Material Co., Ltd., Kingsafe added a flushable, degradable line plus wood pulp composition function with 6000 tons of annual production capacity. In the future, the company will make further investments based on market development needs.

The production of wipes and nonwoven fabrics for wipes will become the top priority of Kingsafe. Therefore, the company takes a series actions. So far, a new factory has been built in Guangdong. “In the second half of 2019, we set up the Wuhan plant. We will have the Chongqing plant and Tianjin plant in 2021 and 2022. In addition, we will expand our Huzhou facility,” Huarong explains. “In terms of production lines, we will install 12 more production lines. Two of them are spunbond lines and the remaining 10 are spunlace lines. In 2021, we expect to sell RMB 1.5 billion worth of wipes. Within the next five years, our annual nonwovens capacity will increase to 600,000 tons. Spunlace nonwovens will comprise about 90% of that share.”

Currently, the China tissue market is dominated by six leading national brands. These leading players’ capacities are ranged between 2-3 million tons a year respectively, with an aim to expand to 10 million tons a year. As the price of nonwovens wipes is approaching that of tissue, the market will develop in favor of wipes. Kingsafe’s target is to produce one million tons of wipes a year.

A Modern Nonwoven Company
Since 2014, Kingsafe has started the implementation of ERP system for its cost, inventory, purchase and sales management. In 2018, the company updated its office automation system to cover attendance, internal mail, WeChat, bulletins, human administration and other functions. Starting in 2019, Kingsafe has connected ERP, monitoring, customer management, equipment management, other decentralized systems and data to OA platform, with an objective to improve the intelligence, management efficiency and capabilities by processing big data, then extract valuable information for the further development and strategy formulation of the company via BI. “With such solid foundation, we believe that our scaled development goals based on high efficiency and high quality can be assured,” Huarong says.

Kingsafe also put great emphasis on environmental protection and has installed sewage treatment facilities which are an essential part of its factories. “We achieved 100% of the recycling of treated wastewater in our nonwovens plants,” Huarong says. “With the sewage treatment facilities invested, our cost is decreased rather than increased, because the cost of reclaimed wastewater from spunlace production line is only RMB 2 per ton, while the cost of tap water is RMB 4 per ton. In addition, more and more companies and industries invest in wastewater treatment, which drives the cost of equipment down. When the scale of a company grows to a certain level, all its operation cost, from raw materials to final products production will come down, including wastewater treatment.”

In the future, Huarong says, “We will improve the infrastructure in our plants in three ways. First, specific power supply to specific production lines, this could avoid the loss caused by power failure. Second, set up special steam and drying pipes. Third, each nonwoven factory will be equipped with wastewater treatment facilities. All kinds of the parts and equipment needed, including pumps and valves, will be purchased globally according to the requirements.”
Related Searches
Related Knowledge Center