After being under fire for the past few years, the positive benefits of single-use wipes are suddenly being widely recognized 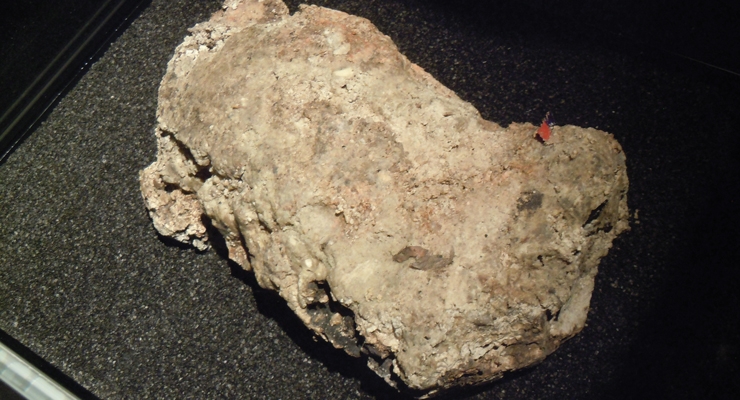 The segment of fatberg displayed in the Museum of London in 2018. Image: Lord Belbury. 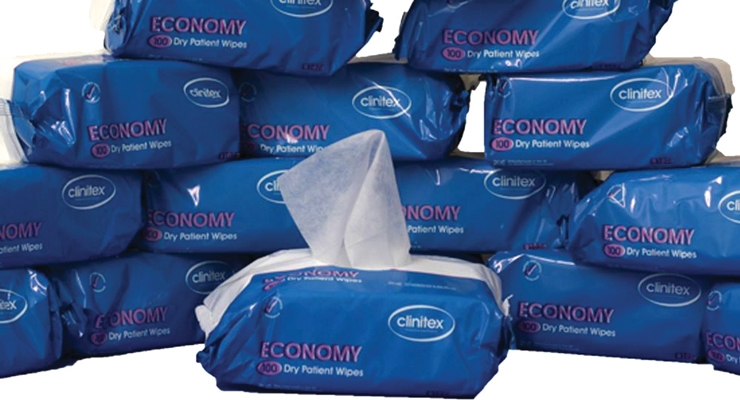 U.K. wipes manufacturer Techtex has seen a surge in demand for its Clinitex-branded products. Image: Techtex

At the forthcoming World of Wipes conference to be held in Minneapolis, MN—assuming it goes ahead from June 22-25 as planned—I will provide an overview of the unique role the U.K. has played in the recent development of the wipes industry.

It was in London, after all, that the first major fatberg emerged back in August 2013, said to be the size of a bus and weighing 17 tons—and generating headlines around the world.

A year later, in September 2014, a second fatberg was discovered in London’s sewers, this one the size of a Boeing 747 airplane and generating more negative publicity for the wipes industry. A third 130-foot London fatberg discovered in 2015 was said to have cost an estimated £400,000 to remove.

The 820-foot fatberg discovered under London in 2017 proved even more expensive to clear up, with costs put at £2 million. Slices of this most famous of fatbergs were displayed at the Museum of London in 2018—after several weeks of drying out—and became one of its most popular and talked about exhibits.

Great Stink
While fatbergs have by no means been limited to the U.K.’s capital, it should be pointed out that London’s sewer system has a uniquely troubled history.

During the early 19th century, the River Thames was an open sewer, with disastrous consequences for public health. Proposals to modernize the city’s sewage system had been made since the 1700s but were constantly delayed due to the huge costs involved.

It was not until the ‘Great Stink’ of 1858 that the U.K. parliament resolved to finally do something about it.

While the problem had been mounting for some years, the Great Stink occurred in July and August 1858, when extremely hot weather exacerbated the smell of untreated human waste and industrial effluent all along the banks of the Thames. The miasma from the effluent was thought to transmit contagious diseases and outbreaks of cholera were blamed on it. Its smell—and fears of its possible further effects—finally pushed the authorities into engaging civil engineer Joseph Bazalgette to oversee the establishment of a new—and very costly—sewer system.

This system is still in operation today, servicing a city that has grown to a population of over eight million, which may in part have contributed to the well-publicized fatberg problems.

Nevertheless, Bazalgette is credited with having saved more Victorian lives in the U.K. than any other public official.

Industry Action
The global nonwovens supply chain had been aware of such potential problems well before the first major London Fatberg of 2013.

Industry associations EDANA in Europe and INDA in North America first formed industry-based task forces to address the issue of the flushability of nonwoven disposables back in 2004, working together to develop a definition, a technical assessment and test methods. The initial test methods were based on the combined experience of the nonwoven disposable products industry and drew upon expertise from academia, consultancy and the wastewater industry.

In 2008, the first edition of EDANA and INDA’s Flushability Guidelines was published to help wipe manufacturers assess whether their products should be flushed into the wastewater stream. The guidelines have been enhanced over the years to ensure continued compatibility with wastewater systems through continuous feedback from stakeholders across the nonwovens and wastewater industries.

Editions 2 and 3 of the guidelines were published in 2009 and 2013, respectively, with the latest and most stringent efforts to date published in November 2018.

In 2017, EDANA also notably partnered with Water UK on a study which found that less than 1% of the materials causing the country’s sewer blockages were products made by its members and designed to be flushed.

In parallel to these developments has been a vast innovation drive by the nonwovens supply chain to develop new technologies and processes which have led to many completely new and highly effective flushable products.

Blue Planet
In October 2017, however, something else emerged from London that made an even greater impression on consumers worldwide.

Blue Planet II, the nature documentary series on marine life, was produced by the BBC and narrated, like its predecessor, The Blue Planet in 2001, by the naturalist Sir David Attenborough.

The debut of the second series was simulcast on BBC One, BBC One HD and BBC Earth, making it the first natural history series to premiere on the same day in the U.K., Nordic regions, Europe and in Asia.

In the U.S., the series premiered in January 2018, as part of a five-network simulcast on BBC America, AMC, IFC, Sundance and WE TV. Subsequent episodes aired on successive Saturdays on BBC America.

The series was highly acclaimed and gained the highest U.K. viewing figure for 2017 with 14.1 million people.

It was also reported that the number of people in China simultaneously streaming Blue Planet II—approximately 80 million—had a noticeable impact on internet speeds within the country.

After the first episode aired in the U.K., there was a surge in search engine enquiries about conservation charities, with the Marine Conservation Society, WWF and Plastic Oceans Foundation all receiving a significant spike in traffic.

In April 2018, in response to growing public support directly linked to Blue Planet II, the British government announced it would impose a national ban on single-use plastic products, including wipes. Faced with a barrage of protest, however, this decision was reversed just a week later.

Single-Use Plastics Directive
The blanket coverage of the problems caused by plastics over the two years after the broadcast of Blue Planet II, however, has created huge consumer awareness and pressure for legislation.

This has resulted, among other things, in the European Commission’s Single-Use Plastics Directive, which is somewhat ironic given the U.K.’s Brexit decision to leave the bloc and pursue its own agenda, untethered to such European legislation.

Although the list of items to be targeted by the directive will not be finally announced until July this year, it is based on the 10 products most commonly found discarded on European beaches, and is 99% certain to include both nonwoven wipes, as well as feminine hygiene products.

In July 2021, EU laws will then come into force requiring such products to carry prominent warning labels, with extended producer responsibility for their clean-up, collection and disposal coming into place in December 2024.

A similar situation is arising in North America, beginning with the California Circular Economy and Plastics Pollution Reduction Act tabled in June 2019, while in Canada, a single-use plastics bill is being drafted along the same lines as the EU Directive.

EDANA and INDA will also once again update their Flushability Guidelines this year, to specifically address the issue of plastics.

The ‘Do Not Flush’ symbol is to move to the packs in order to be fully visible to the consumer and must be of a size proportional to the pack (a diameter of 15mm on an average pack).

In addition, in order to further avoid any possible confusion, all baby wipes are to carry the ‘Do Not Flush’ symbol—even those that are fully flushable.

All Change in 2020
However, with the emergence of the Coronavirus—first reported from Wuhan in China on December 31, 2019, and on March 11, 2020, declared a global pandemic—the benefits of disposable wipes have rapidly become highly prized, along with other essential nonwoven products such as facemasks and personal protective equipment (PPE).

Recent news features on the BBC and Sky News in the U.K., for example, have highlighted the benefits of products such as Sani-Hands antibacterial hand wipes, made in the country by Nice-Pak.

These provide up to six hours’ protection against germs and bacteria and are fast becoming an important weapon in the current U.K. campaign for improved hand hygiene.
“Consumer consciousness of the importance of personal health and hygiene has been heightened in recent weeks and the outbreak of the Coronavirus reminds us of our need to protect our personal health,” Nice-Pak’s marketing director Ian Anderson told the news crews. “We are currently working throughout our supply chain to respond to the sudden rise in demand and looking at contingency plans to increase our capacity. With 80% of communicable diseases transferred by touch, keeping our hands clean is one of the most important steps we can take to prevent the transmission of infections and the World Health Organization is currently recommending that the public help to protect themselves with regular hand cleaning.”

Spike in Demand
Techtex is another U.K. supplier of wipes, largely to the healthcare industry, and has seen a surge in demand for its Clinitex-branded products.

“We have received significantly higher volumes of large orders and additional orders for sanitizing products such as alcohol gels, alcohol wipes and wet wipes containing liquids proven under EN standards to be effective against envelope viruses,” says managing director David Beardsworth. “The problem is that this unprecedented demand far outstrips our manufacturing capacity which is currently running seven days per week plus night shifts.

“Judging by who is contacting us, demand currently far outstrips supply globally,” he adds. “Even if we could produce these huge volumes, we would not be able to source enough packaging materials such as the tubs, buckets and films that the wipes and liquids are dispensed from. Many of our suppliers are already ‘rationing’ such items. In an attempt to manage our way through this huge spike we are prioritizing who we supply to and concentrating on our strategic long-term customers, as well as the NHS (National Health Service) and those distributors supplying care facilities such as nursing homes and care homes.”

Wipes are also now being rationed in U.K. supermarkets because panic buyers have been stripping them from the shelves.

This is something of a turnaround, to say the least, for a product category that faced the prospect of an outright ban in the country just two years ago.
Related Searches