Last year, Ahlstrom announced a plan to merge with Munksjö Oyj to create a leader in sustainable and innovative-fiber solutions. In conjunction, Sakari Ahdekivi was appointed interim president & CEO of Ahlstrom. He replaced Marco Levi, who left the company.

Ahdekivi comments, “"In 2016, we achieved an all-time high profitability in the current structure of the company and our balance sheet is much stronger than before. During the latter part of the year we also demonstrated our ability to grow, something we have lacked in the past few years, and achieved remarkable growth in net sales of close to 5% at constant currency rates in the last quarter of the year. In addition to higher sales, we also benefited from improved operational efficiency and lower variable costs. Our business units made good progress and the majority improved their sales and operating profits throughout the year.

“We have executed on our strategy at an accelerated pace. Our margins have clearly increased thanks to improved commercial excellence, a leaner operating model, higher capacity utilization and our ability to capture new growth opportunities. As a result, we came close to achieving our 2018 profitability target of above 8% adjusted operating profit margin already in 2016.

“The planned merger with Munksjö Oyj is a major strategic milestone in the recent history of Ahlstrom. This combination will create a leader in innovative and sustainable fiber-based solutions. The deal will create substantial value to our stakeholders by offering further opportunities for growth and improved operational efficiency. A strong balance sheet and cash generation will support growth of the combined company. The focus will now be on completing the merger and the subsequent integration of the two companies."
Related Searches
Suggested For You 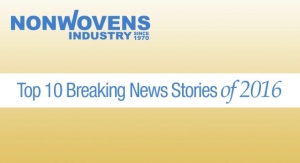