Nonwovens continue to replace other materials in cars and automotive components. 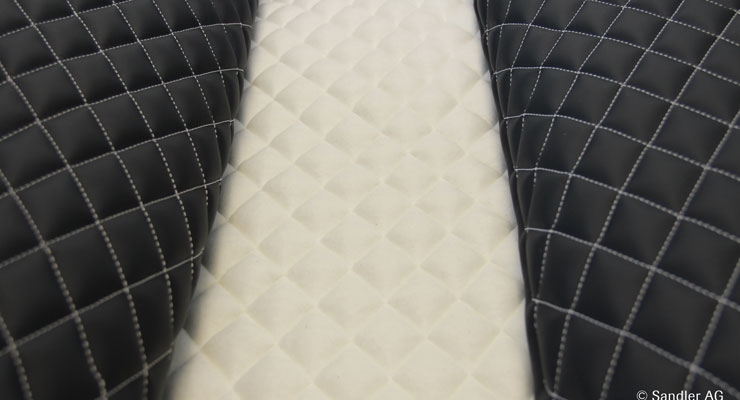 Sawaloom needlepunched nonwovens from Sandler are used in seat upholstery. 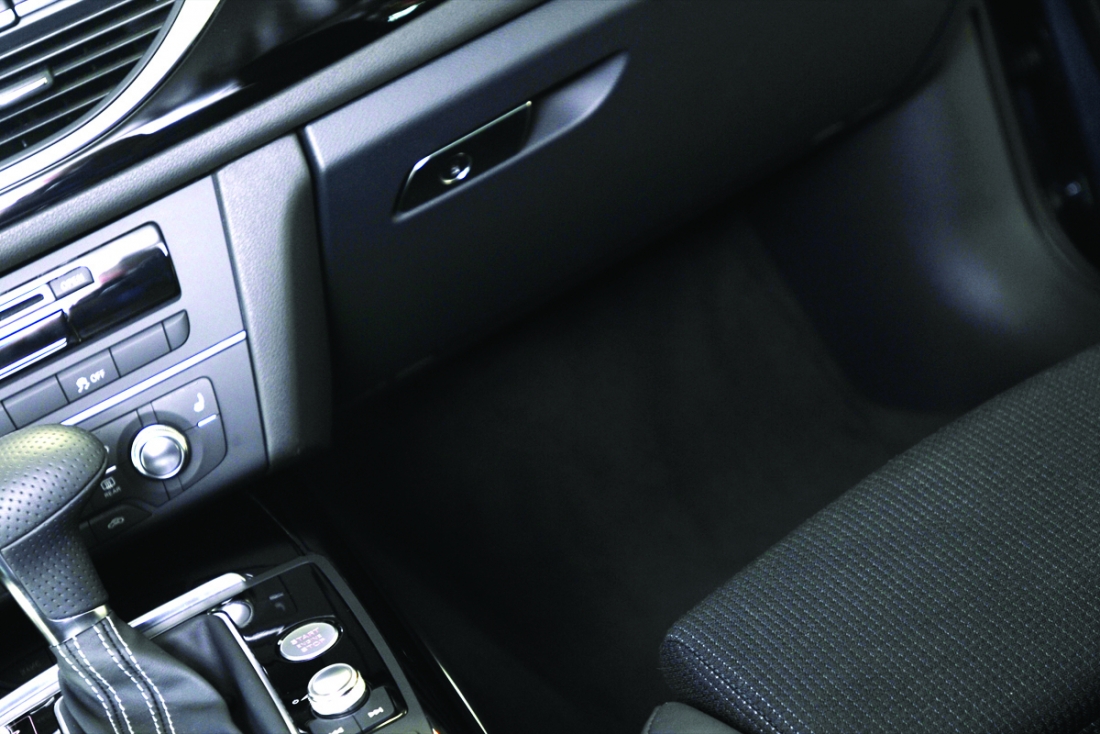 Freudenberg’s Lutraflor technology can provide weight savings of up to 40% compared to conventional automotive carpets.

Automakers are recognizing the numerous benefits nonwovens provide to many areas of the vehicle. Used in over 40 automotive components, nonwovens are more cost-effective than traditional textiles, are tailor-made for specific functions, offer excellent moldability and durability, and provide a number of environmentally sustainable advantages.

Statistics from EDANA, the international association for the nonwovens and related industries, find that nonwovens are 15-30% lighter than the traditional materials they replace, able to make cars over two kilograms lighter. Further, vehicles using nonwovens in all possible applications have a benefit of more than 30% less impact on the environment.

Tighter regulations on fuel consumption, especially in Europe, the U.S. and Asia, have opened up doors for nonwovens in the auto market.

“The growing awareness of environmental issues fosters a sustainable use of resources,” says Dr. Frank Heislitz, chief technology officer, Freudenberg Performance Materials. “Nonwovens help to cater to this trend by reducing weight and thus improving fuel economy of cars. They increase the recyclability quota with a higher share of recycled raw materials. Additionally, more recycling during the production process and a higher recycling rate for end-of-life vehicles improves the environmental footprint of vehicles.”

Freudenberg’s spunlaid nonwovens based on Lutradur technology can be found in tuft-backings and lightweight carpets. Made of 90% recycled polyester, Heislitz says this ideal spunlaid allows the company to deliver on its promise to cater for the market trend of sustainability.

Meanwhile, Freudenberg’s nonwovens based on Lutraflor technology feature a high-quality appearance, an environmentally friendly production process and excellent formability. Used for automotive carpets, insert mats and interior and trunk linings, this technology has eliminated the use of latex and other chemical binders. “Compared to conventional automotive carpets, these nonwovens provide weight savings of up to 40%,” Heislitz explains.

For noise reduction in vehicles, Freudenberg’s Evolon microfilament technology offers some notable advantages compared to classic solutions. “The adjustable flow resistance offers excellent sound absorption, particularly in the frequency range from 600-6000Hz. The Evolon microfilament material is also characterized by its ease of processing for shaping, cutting and bonding. Thanks to the outstanding strength to weight ratio, it offers significant potential for reducing the weight of components,” Heislitz says.

Freudenberg is also seeing success for its nonwovens in headliner facings, which are used not only in headliners, but also in trunk liners and seat backs. These materials are mechanically bonded and offer a three-dimensional engineered surface. Demand for these products has prompted the company to invest in its Asian headliner business through Freudenberg & Vilene Nonwovens, its joint venture with Japan Vilene Company of Tokyo. A new production line for car headliners began operating at its site in Suzhou, China, in September to meet increasing demand for high-quality car roof linings and quality printed products in Asia.

“Our headliners are based on nonwovens and can be printed and finished in various ways to provide additional functionality,” Heislitz says. “Apart from excellent abrasion resistance, outstanding acoustic properties and improved stain resistance, these products contribute to a marked reduction in vehicle weight when combined with other vehicle components.”
Freudenberg & Vilene is reportedly the only manufacturer in Asia with automotive in-house printing capabilities. It first introduced printed headliners to the market in 2010. The new line will enable Freudenberg to increase its production volumes.

TWE Grows for the Future
Meanwhile, TWE Group’s role in the automotives market expanded last year with the acquisitions of Vita Nonwovens’ U.S. operations, which produces thermal bonding and needlepunch technologies at plants in Texas, North Carolina and Indiana, and Isowood, a German nonwovens producer specialized in the use of natural fibers such as hemp, flax, kenaf and jute.
TWE Group says it has purchased companies that specialize in automotives so that it can better serve its international customers.

“The market is] mainly driven by replacement of old cars since the crisis is over, and many customers have postponed investing in a new car during that time,” he says.

In response to megatrends such as reducing fuel consumption, increasing comfort inside the vehicle and hybrid/electrical cars, the company has developed an R&D roadmap as it seeks new opportunities in the automotive market. “We will replace structural plastic or even steel components with nonwovens in order to respond to the request for weight reduction,” Lauk says. “Generally speaking, we will integrate more functions into our materials as an additional benefit to our customers and in order to gain competitive advantage.”

Texel Eyes Opportunities
Texel is making advances in the automotives sector with its ThermoFit and VersaFlex technologies. Primarily used for acoustic purposes, ThermoFit is lighter in weight compared to extruded and injected plastics and is moldable in three dimensions. Applications include air ducts, door panels, wheel well liners and trunk liners.

The Canadian needlepunch manufacturer is seeing ThermoFit replace injected plastics in air ducts due to the acoustic properties of needlepunch. “By using Texel’s needlepunch air ducts, we’re able to lower the noise inside the vehicle by quite a lot,” says Marc-André Drouin, Texel’s business unit manager for automotive. “All of these new cars have quieter smaller engines. Also with the electrification of vehicles, the noise coming from the road and the ventilation system is more annoying to the consumer than ever before because they’re not hearing the engine as much. We’re seeing big growth there, and the OEMs are requesting more and more of this type of air duct.”

Drouin says that while its business began with wheel well liners in 2006, it has focused more of its efforts toward headliners lately. “That’s where we’ve seen a lot of growth and R&D recently for the VersaFlex family,” he explains.

Developments for VersaFlex include creating much lighter material—this is what the market is requesting, according to the company. Texel has overcome the challenge of getting a very uniform product with lighter material by using different fibers, which have enabled it to vary the permeability of the product, optimize it and close it. “That’s where we’ve put a lot of effort now, and we have been supplying most of our customers with these newer-type products in the last year or two,” Drouin says.

Other developmental projects are underway following the acquisition of Texel by Lydall Inc. The Manchester, CT-based specialist in the thermal/acoustical and filtration/separation markets purchased the company this summer for a reported $96 million. Lydall executives have said Texel’s strength in adjacent markets like geosynthetics, liquid filtration and automotives were key motivators behind the acquisition.

Texel hopes to grow its wheel well liner business as it collaborates with Lydall. “With Lydall, which will become an internal customer for us, we will have many more opportunities for Texel’s products,” Drouin says.

Sandler Responds to Global Demands
Europe, the U.S., and Asia—especially China—are regions where Sandler is seeing growth in the automotives market. Gerhard Klier, sales director, Technical Products at Sandler, points out that as the automotive industry recognizes the versatile possibilities offered by nonwovens, the use of nonwovens in these applications increases. “On the other hand, the markets e.g. in Asia, are still developing and showing high growth rates, thus creating huge demand. The U.S. market is growing in a similar fashion,” he adds.

The German nonwovens producer is responding to global demands by working with local partners and sales representatives. It’s been operating a sales office in Shanghai, China, since 2004 and opened a sales office in New Delhi, India, in 2011. This has eliminated cultural and language barriers from the start, Klier says, adding that they’re also gaining in-depth knowledge of local requirements.

The role of nonwovens in the automotive industry continues to grow, according to Klier. Nonwovens, especially made of synthetic fibers, were mainly used for interior applications just a few years ago, he says, but developments and application areas now also extend to the exterior of the vehicle, including the engine, underbodies and wheel house arches. “Due to their many advantages in comparison to other materials, nonwovens increasingly won over designers, development engineers and lately also people in charge of components.”
For its part in the automotive industry, Sandler supplies absorbers, upholstery and cover nonwovens as well as carrier materials for molded parts.

This year the company added products to its sawasorb line of thermally and/or mechanically bonded absorber nonwovens that can be used in nearly every acoustic application.

Sawasorb advanced caters to the trend of lightweight components. At a thickness of just 6mm, sawasorb advanced meets acoustic requirements designed to be met by absorbers of about 15mm thickness. “The nonwovens feature excellent sound absorption throughout the frequency range at low product thickness,” Klier says. Sawasorb advanced can be used for narrow installation spaces including door side panels and dashboards.

Meanwhile, the new sawasorb premium exterior shadow can be used in exterior applications including wheel house liners, bumpers and underbody shields. Also lightweight, it features enhanced sound absorption at low product thickness. The material’s surface and edges retain hydrophobic and oleophobic properties throughout its operating life. Because its edges preserve these qualities, it prevents the need for further processing.

Other new developments from Sandler include sawaloom needlepunched nonwovens for seat upholstery. These nonwovens feature a soft, bulky, foam-like texture and are drapeable, adapting to the contours of the seat. Due to its upholstery characteristics and pressure-elastic properties, the material is particularly suited to quilting with leather, resulting in a particularly pronounced three-dimensional appearance, Klier says.

Sustainable Repellent
AGC Chemicals Americas (AGC), a manufacturer of fluoroproducts, has been promoting its AsahiGuard E-Series high-performance, PFOA-free repellents for use in automotive interior components.

Mario Vincenzini, a technical service engineer at AGC, says the AsahiGuard E-Series works well on nonwovens used in automotive components because it provides strong water and oil repellency, therefore preventing stains or making stains easier to remove. Automotive applications for AsahiGuard-treated nonwovens include everything from seating fabrics, reinforcements and linings for trunks, consoles, rear shelves and roofs, to transmission panel and bodywork parts and battery separators.

The repellent can also be applied to nonwovens used for noise dampening applications. “Nonwoven fabrics are used under the hood to dampen engine noises, and AsahiGuard E-Series repellents prevent oil, greases and dirt on the engine from sticking, keeping the fabrics looking nicer, longer,” Vincenzini says.

The formulation is a patented short-chain C6 polymer technology that offers improved environmental and biological profiles compared to other repellents on the market.

“Historically, the repellency market used longer chain fluorocarbons—we use six carbons that are fluorinated. The longer chains were eight fluorinated carbons (C8) or higher, so they have a lot more biopersistence and bioaccumulation attributes compared to C6 versions,” Vincenzini explains. “Harmful byproducts can come from C8 versions, where with the C6, we don’t have that issue. So as far as the C6 versus the C8, the C6 is much safer to people and the environment.”
Related Searches
Related Knowledge Center
Suggested For You 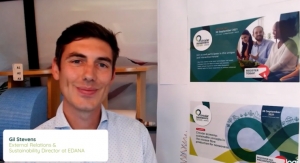