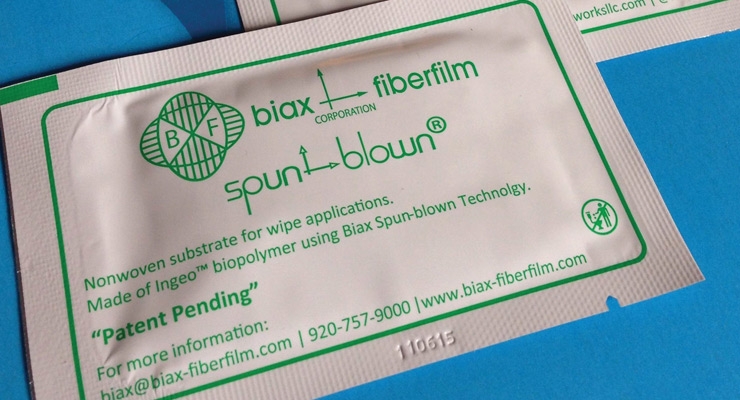 In a conventional meltblown process, we have a single row of nozzles emerging a plurality of molten polymer filaments that are attenuated using hot high speed air slots. The attenuated fibers are then collected on a belt. A typical meltblown spinnerette has around 35 holes per inch where we have a single row of polymer holes sandwiched between two inclined air jets to attenuate the fiber streams. Typical fiber size is 1-10 microns and fabric strength is weak.

In a spunbond process, we produce strong fibrous nonwoven webs directly from thermoplastic polymers. Initially the filaments are quenched by cold air near the spinnerette face to be solidified then attenuated using high speed air. Individual fibers are then laid down randomly on a collection belt and conveyed to the bonding process to give the fabric the strength and the integrity it needs.
Fiber size is usually 10-50 microns on average and they are very strong compared to the meltblown fibers because of the molecular chain alignment that is achieved during the attenuation of the crystallized (solidified) filaments. Typical spunbond die has a multirow of polymer holes. Typical polymer melt flow rate is below 500 g/10 min.

Spunblown is hybrid process bridging the gap between conventional meltblown and the spunbond process. The The spun-blown process has a multi-row spinnerette similar to spunbond technology but the filaments are attenuated at the nozzle’s tip using high speed air similar to the meltblown process. As a result, the process allows for the production of materials with strength approaching that of spunbond but with fiber size similar to meltblown. Tensile strength is between that of spunbond and meltblown but with greater elongation than either. The process can handle high operating pressures up to 2000 psi because of the robust spinnerette built, which enables it to spin a wide variety of resins with melt flow rate ranging between 5-2500 grams per 10 minutes and operate at lower temperatures that would result in more flexibility and higher energy cost savings. Such advantage allows companies like NatureWorks, ExxonMobil and Kraton to spin some of their polymers, which are very difficult to spin on traditional meltblown lines, successfully on the Biax system. Another competitive advantage of spunblown technology over the standard meltblown technology is the high production capacity. Because of the multi-row design of Biax’s spinnerette, it is one-and-a-half to five times more productive than the traditional meltblown process as it can go up to 500 kg/m/hr. Another unique feature is that spunblown fabrics tend to have wide fiber size distribution because of the multirow nature of the spinnerette design that enables co-mingling of fine fibers with big fibers that are coming out of one spinnerette. Wide fiber size distribution allows for higher dust holding capacity in case of a filtration application – two to four times higher than tradition meltblown – and higher absorbency in case of wipes applications.

Having the capabilities of spinning highly viscous and higher molecular weight resins, such as polylactic acid (PLA), Kraton MD 1648, Vistamax 7050 & 6102 and polypropylene with MFR below 500 g/10 min, opens the door for a new class of fibrous materials. Co-mingling such fibers with airlaid streams would result in a hybrid category of nonwoven materials that can be used as wipe substrates or other unique applications. During the 2015 WOW Conference, Biax-Fiberfilm demonstrated the technology by producing a wipe substrate made of 100% sustainable resources which are PLA that is made of corn starch and pulp fibers that come from trees.
Related Searches
Related Knowledge Center
Suggested For You