The nonwovens industry has a new baby – HYGIENIX: The Premier Event for the Absorbent Hygiene and Personal Care Markets. Proud parent INDA is getting ready for its first showing October 26-29, at the Renaissance Vinoy Resort in St. Petersburg, FL.

When this conference makes its debut in the fall, it will do so with all the wisdom and experience of its forefathers – INSIGHT International Conference and VISION Consumer Products Conference – combined with new energy, creating the segment’s largest, most impactful, value-added event.

After years of investing time and money to travel and participate in two events with similar focuses, nonwovens companies are excited about INDA’s move to create HYGIENIX as a single event with a new name and identity, born from the successful legacies of the past. 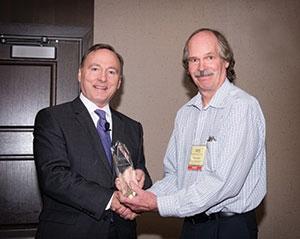 INDA president Dave Rousse honors Jim Hansen at INSIGHT 2014.
“I am excited about attending and agree this is a great move,” says Robert Green, director Fibers & Non-Wovens, NatureWorks LLC. “What we already saw as good value will only be improved on from our perspective. Hats off to INDA for being proactive in making positive changes to benefit member companies.”

It’s not every day that a membership association acquires a well-established long-standing industry event with the intention of adding greater value for its members. But that’s what INDA has done with the purchase of 37-year-old INSIGHT from Marketing Technology Service, Inc. in May 2014.

INDA purchased the INSIGHT conference in summer 2014 but the conference continued to be run by its former owner for its final edition, which was held in Indianapolis, IN in October. The company’s 2015 VISION conference, originally scheduled for January, was canceled after the sale.

“I personally believe there were too many shows and that similar topics seemed to be more prevalent,” he says. “Any work to combine them, even if an added day is required, saves overall on fees, travel, and added expenses. I am excited to attend HYGIENIX and to see how bringing the two conferences together is managed and the topics chosen.”

Kirstin Hedin, global marketing manager for Nonwovens/Hygiene at H.B. Fuller, also sees the combined event as a money- and time-saver.

“In the past, H.B. Fuller would send limited attendees to VISION because we found it to have more technical representation from the market, whereas at INSIGHT our customers and co-suppliers were represented at all functions, including key decision makers,” she says.

The findings showed that more than half of the 370-plus total respondents preferred a new name. Respondents said they believed a new name was appropriate to signify a fresh start to a show that is anticipated to capture the best of both predecessors.
“We are excited about this new event,” Rousse says. “INDA’s most successful events focus on specific verticals with a very clear event title that informs the viewer of what to expect.”

A new tagline touting the expectation that HYGIENIX will be the premier event in this major nonwovens segment also was selected. The tagline is connected to the new conference name and tied together the newly designed logo that respondents felt captured the clean, fresh look appropriate for a hygiene event.

Rousse says the new event will appeal to followers of both VISION and INSIGHT, as well as new companies interested in absorbent hygiene and personal care markets who immediately will be attracted to HYGIENIX through the proposition in its logo and tag line.
Absorbent hygiene is the biggest nonwovens market overall. Rousse explained the combination of hygiene and personal care is logical because many hygiene products have personal care allied products, such as wipes, under the same brand, so keeping the two together provides the most value for industry participants who buy and sell these products.

INDA also used the survey to test the market response on the importance of content versus networking, the length of the conference, networking functions, number of sessions, and other program areas. Planning is well underway on the speakers and topics. A welcome reception and “Dining with Industry Thought Leaders” are among events scheduled.

Keeping the fall timeframe associated with INSIGHT and the Florida location have also received a warm response. “Having attended INSIGHT in the past at the Vinoy Resort, I can say it’s a great location and an excellent time of the year to be on the Gulf Coast,” Green says. 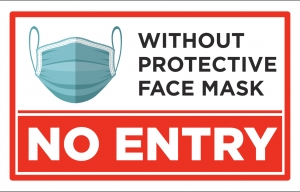