The Leading Global Technology for Nonwoven Supply and Demand

In 2011, global demand for spunmelt polypropylene was estimated to be about 2 million tonnes and is projected to reach nearly 2.4 million tonnes in 2015.For hygiene uses alone, global demand for spunmelt polypropylene nonwovens was approximately 65 billion square meters in 2011 and is expected to grow to nearly 80 billion square meters in 2015.

Global demand in tonnes for spunmelt polypropylene nonwovens is forecast to rise slightly more than 4% annually from 2011- 2015 and at higher rates in emerging markets.Growth rates are expected to be highest in China, Africa, the Middle East, South America and the Asia Pacific regions while more moderate growth rates are projected for Europe and North America.Global demand in square meters is forecast to be even higher than in tonnes, rising above 4.5% per year during this period.

Spunmelt polypropylene capacity has grown to keep pace with rising demand as well as to replace earlier generation technology with more modern, cost-competitive capability.In 2005, global capacity of spunmelt polypropylene technology was approximately 1.9 million tonnes.From 2005 to 2011, global capacity was estimated to have grown at a rate of 5.1% per year to 2.6 million tonnes.It is worth noting that tonnes of capacity are expressed as nameplate or design capacity, gross of machine downtime or resin to fabric yield.Output capacity was estimated to be on the order of 2.2 to 2.3 million tonnes in 2011.Nameplate capacity for hygiene end uses in square meters in 2011 was approximately 85 billion square meters in 2011. 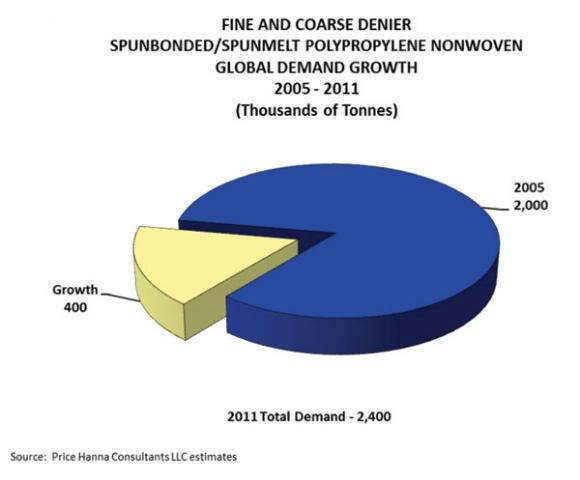 The growth in polypropylene spunmelt capacity has been most impressive recently. Since September 2010, 25 high capacity production lines have been announced for installation which together totals nearly 450,000 tonnes of nameplate capacity.The largest amount of this new capacity is to be installed in China and the Middle East and North Africa (MENA) by 2015.All other global regions will have new line installations as well.Most notable are modern, high capacity line installations in Egypt and Indonesia to serve the requirements of expanding hygiene product converting capacity.

The high number of new capacity installations is driven by the convergence of the needs for capacity modernization, geographic expansion and rising demand. 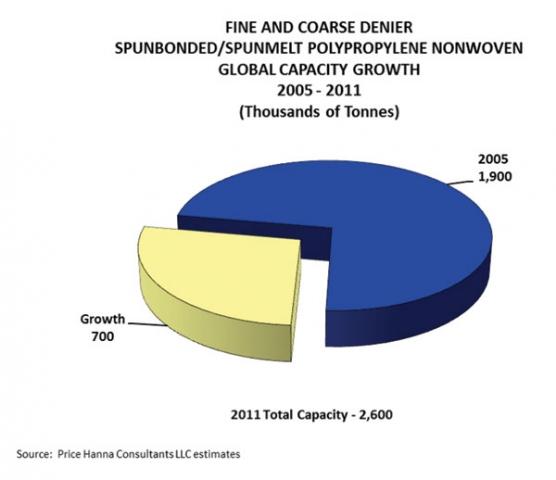 Producers are compelled to modernize to be competitive suppliers to the hygiene market where strong, uniform nonwovens are required at basis weights as low as 10 gsm which cannot be produced economically on early generation spunmelt equipment.Producers are also driven to modernize in order to achieve improved profitability from lower manufacturing costs, which can be achieved on high output, modern lines that are fully utilized.

Individual global regions are at different stages in the replacement of early generation spunmelt polypropylene technology.Some regions are well advanced, having replaced, and in some cases decommissioned, early generation technology.In other regions, demand growth is overriding the need for replacement at this time, allowing for both early generation and new technology to operate concurrently.Nevertheless, the hygiene leaders’ needs for increasing volumes of uniform, lightweight spunmelt polypropylene at the lowest available prices are motivating investment in state-of-the-art lines in emerging markets.

Capacity expansion is also occurring as a result of varying strategies among nonwoven producers.In each region, there are leaders who have and continue to commission new technology.There also are new entrants who buy the latest generation spunmelt lines.At the same time, there are producers who are slowly adopting by cautiously re-investing, some who are withdrawing from the intensively competitive markets for spunmelt polypropylene and some producers who are taking no investment actions at all.

The commissioning of new capacity will have an impact on the utilization rate of spunmelt polypropylene equipment among regions, depending upon its pace and particularly if early generation lines continue to operate as well.On the whole, we estimate that capacity utilization may fall below 80% in some, but not all regions, during 2012 to 2014 as new lines are commissioned and, possibly again in 2016, as a second round of planned line commissioning occurs.The lowest capacity utilization is likely to occur in those regions where the largest units of capacity are installed.

In addition to how producers deal with the installation of new and the rationalization of old capacity, there may be other impacts that this new round of spunbonded polypropylene capacity could bring about.One of these impacts is the increasingly high capital cost of new spunmelt polypropylene technology, which could prompt consolidation among some producers to share the burden of the high investment cost. A second, related impact is the challenge of technological obsolescence requiring continuing re-investment to remain competitive. The rapid pace of technology modernization drives concern about falling behind in the race to modernize forcing a choice between modernizing, repositioning or even withdrawing from the market. Still another issue may be the change in import and export flows, as new producers in regions formerly requiring imports, seek to become exporters.

Despite these growth impacts, the modernization of the spunmelt polypropylene technology platform is healthy and positive.New capacity is being installed to serve growing market demand and the markets’ challenging and ever changing needs.This dynamic demonstrates the vibrancy of the market demand for products made on this leading nonwoven technology.