INDA, Association of the Nonwoven Fabrics Industry, organizer of the event that Vision succeeded in its goal of bringing together companies from both the consumer products and engineered fabrics industries. Originally scheduled to be held in New Orleans—where it had been for three of its four previous editions—Vision was redirected to Denver in September in  the wake of Hurricane Katrina.

“Once again, VISION 2006 succeeded in its goal of being the place and time for consumer products companies to meet and network with their suppliers from the nonwovens and engineered fabrics side of the business,” says INDA president Rory Holmes.

A highlight of the Conference was the selection of the Disaster Relief Blanket from Chicopee, a division of The Procter & Gamble Co., as the recipient of the 2006 Visionary Award. Vision 2006 attendees chose the Disaster Relief Blanket over four other finalists— Mr. Clean Magic Reach from Procter & Gamble; Johnson & Johnson’s Stayfree Advanced Protection; the Disposable Mitt with Body Wash from Kimberly-Clark and Cotton Enhanced Baby Wipes from PGI Nonwovens.

“Consumer products using nonwoven fabrics are playing an increasingly important role in both our everyday lives as well as in extraordinary situations,” said Michael Jacobsen, Visionary Award project coordinator. “The Vision 2006 attendees recognized the contributions the Chicopee Disaster Relief Blanket is making in emergency situations around the world and it was chosen over four other extremely deserving and successful consumer products from some of the biggest names in the business.”

Other highlights of Vision 2006 included:

* In his opening presentation, Sam Hill, principal of the consulting firm FTI Helios, told attendees that their industry has a choice as to whether it is going to become a commodity or a value-added business. “You can choose to be more differentiated or you can choose to become more commoditized,” he said. “It is a group choice.”

* Consumer products giant The Procter & Gamble., according to the company’s Larry Huston, is not only looking for outside new product ideas, it believes its success depends on them. That has given birth to its groundbreaking “Connect & Develop” concept, which now dominates P&G’s product development efforts globally. “Procter & Gamble Co. has moved to a connections model, rather than its previous inventions model,” Mr. Huston said.

* When designing product—particularly a product as personal as incontinence products—it is vital for a company to know what its customers want and need. Tyco has taken a step beyond traditional consumer research and focus groups and now its product development people literally put their bodies where their products are, said the company’s Kim Babusik. With the help of some intrepid volunteers, she demonstrated the company’s Voice of the Consumer (VOC) style of research. Tyco puts its researchers into the role of age-related situations—arthritis, wheelchair-bound, blind, etc.—and then has those researchers actually try on and wear existing incontinence products.

INDA will announce the exact dates and locations for Vision 2007 this spring. For more information: www.inda.org. 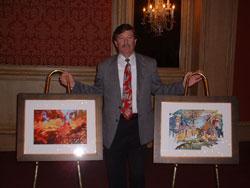 Dan Cronin of BBA who presented the update on the company's Resolution print Media, the 2005 Visionary Award winner. 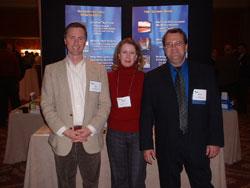 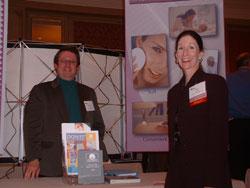 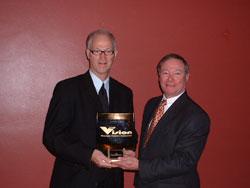 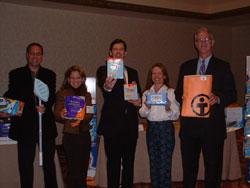 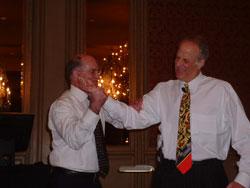 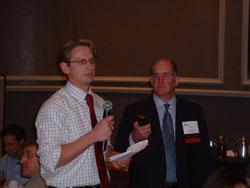 The roundtable discussions on Day 1 luncheon focused on topics such as sustaintability, globalization and enery prices. Here, reidrick Feddes of Purac America gives his table's report on energy and raw materials while Rob Johnson looks on.