BBA Fiberweb, Simpsonville, SC, has made several recent personnel changes. Sam Depriest has joined BBA Fiberweb’s Graphic Arts group as area manager for the Midwest territory. Also new to the group is Shawn Davis, who will cover the Northeast region of the U.S. and Canada. Jeff Smith has joined the Graphic Arts group and will be covering the West Coast region while Jeff Andes has been promoted to senior area manager in the mid-Atlantic region. 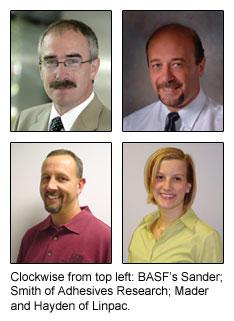 As of September 1, 2005, Jan-Peter Sander is the new head of BASF’s adhesive and construction industry business in Europe. He succeeds Ralph Schweens, who now leads global marketing coordination for BASF Polyurethanes in Brussels. He joined BASF in 1987 and has held a number of positions in Europe and Asia. In 2003, he became head of the global business unit performance chemicals for the automotive and oil industry headquartered in Ludwigshafen.

The ChemQuest Group has appointed  Zhiming Zhou general manager, China. Dr. Zhou will be located at ChemQuest’s newly opened office in China. Prior to joining ChemQuest, Dr. Zhou worked for 3M where he served as team leader for consumer products and new product development. Dr. Zhou’s experience includes more than 18 years of active involvement in many aspects of adhesives and coatings in the U.S., U.K. and China.

Michelman, Cincinnati, OH, has named Donald Wiseman vice president of global operations. Former group director of plastics at Americhem, Inc., Mr. Wiseman will be responsible for all global manufacturing operations, logistics, engineering, process engineering and purchasing at Michelman. With more than 15 years of leadership experience at blue-chip companies in the chemical and composite industries, Mr. Wiseman previously served in management roles for Americhem and Rohm and Haas.

Brian Smith has assumed the role of manager of environmental health and safety at Adhesives Research, Glen Rock, PA. Mr. Smith has been with Adhesives Research since 1999, most recently as the company’s EH&S group leader. In this position, he coordinated company-wide semi-annual evacuation drills, developed and managed monthly safety training programs and managed the company’s hazardous waste program and environmental reporting requirements. Over the past year, Mr. Smith has taken on additional responsibilities and, in his new position as manager, is now also responsible for compliance with federal, state and local regulations, directing training efforts related to safety and environmental matters and serving as the primary contact for regulatory inspections.

Effective July 2005, Jens Kellersmann has assumed responsibility for the corporate communication of Eduard Küsters Maschinenfabrik GmbH & Co. KG. In addition, he is entrusted with the marketing and communication for the paper division of the Küsters Group. For the past three years, Mr. Kellersmann has been connected with the enterprise, which since August has been part of Jagenberg AG.

Linpac Materials Handling has made two recent personnel appointments. Stuart Hayden has been named plant manager of the company’s Georgetown, KY manufacturing facility while Brigitte Mader has been promoted to marketing specialist with a focus on the automotive industry. Previously Mr. Hayden was the plant manager at Linpac’s manufacturing facility in Bardstown, KY, his original position when he joined the company five years ago. Ms. Mader previously served as a Linpac account representative with a focus on the beverage industry. Her new responsibilities include working with the company’s automotive industry sales, solutions and development teams to create targeted marketing strategies and promotional materials. 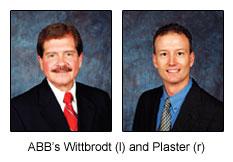