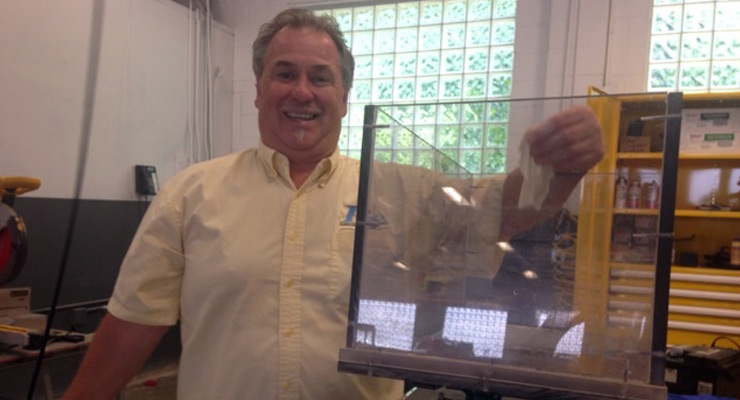 Rob Villee  knows toilets. As the executive director of  PARSA (the Plainfield Area Regional Sewage Authority) in Middlesex, NJ, for the past 20 years, he has seen all sorts of things move through sewage systems. He even has a test toilet at his facility to gauge the flushability of items being passed through the john.

During the past couple of years, Villee, like just about everyone else, has seen a lot of attention shift to wipes and their role in clogging these systems. He spends a lot of his time testing wipes and other products claiming to be flushable and he’s found that the problem is not wipes that are engineered to be flushable causing the problem—it’s consumer confusion over what can and can’t be flushed. “Once the flushable wipes started coming out, people started flushing wipes that shouldn’t be flushed. They don’t know the difference.”

To help solve this problem, Villee upped his profile in the nonwovens industry. He has spoken at two World of Wipes (WOW) conferences, served on INDA’s joint task force with the wastewater industry and currently is working on the committee developing the fourth edition of flushability guidelines (GD4).

All of this work, in fact, has given him a nickname, The Lord of the Wipes, in the wastewater industry.

While analyses of toilet clogs show many materials contributing to the problem—Villee says that commercial paper towels is the biggest offender—wipes have shouldered much of the blame because more problems started arising around the same time that flushable wipes were introduced.

"Wipes in the Pipes is catchy, and acurate, to the media and wastewater industry," he says. "A wipe is a wipe is a wipe. Whether they were designed to be flushed or not they are so therefore, they are flushable wipes."

Villee says the problem with wipes started when the manufacturers created a flushable labeled wipes, which were originally nothing more than a size-engineered or cut-down baby wipe. The lack of clear differentiation between the flushable labeled wipes and the ones not designed to be flushable has allowed the consumer to make these decisions on their own, he adds.

While flushability labeling has been included in the code of practices within the existing flushability guidelines, Villee says he still sees examples of pathetic labeling regularly.

“I am probably more aware of wipes packaging than the typical shopper and I still struggle with what’s what. Shoppers should be able to look at a package on the shelf and instantly determine whether a wipe is flushable or do-not-flush. That means the do-not-flush logo needs to be prominent on the package facing the consumer.”

Villee says he’d like to see all wipes be engineered to be flushable but he understands that the technology behind flushable substrates is more expensive than non-flushable wipes. Another option would be to print the Do Not Flush logo directly on the wipes substrate. This way the consumer couldn’t miss it.

“I would really like to see a big retailer step up and demand that proper labeling be enforced,” he says. “I’d love to see a Target, a Walmart or a Costco reach out to the wastewater industry and say you tell us what you want as far as labeling and/or construction—we do not want to continue to be part of the problem.”

To listen to more Villee’s interview with Nonwovens Industry, check out our latest podcast.