Strength in core markets has led to global investments.

The needlepunch market is on a path of growth, and global players in the market are optimistic about the future. According to recent estimates released by EDANA, the international association serving the nonwovens and related industries, needlepunch was among the processes that showed the strongest growth in Europe in 2014. Figures show that the needlepunch bonding process grew by 9.1% in tons from 2013 to 2014. Further, a key market for needlepunch, automotives, had a banner year in 2015, with automakers selling a record 17.5 million cars and light trucks in the U.S.

Alex Alexis, business unit manager at Texel, a Canadian producer of technical fabrics, says overall business is extraordinarily high, and the company is seeing strong demand in automotives, geotextiles and building. Due to the strong demand in automotive for needlepunch material—for filtration, headliners, seating, wheel well liners and trunk liners—manufacturers are installing lines, he says. “Some of us are dropping other businesses in order to fulfill the automotive market.”

Acoustical materials for automotives and furniture are also key markets for Texel. The company’s Thermofit needlepunch technology used in vehicles allows customers to create acoustical parts that are 40%-50% lighter than parts made with extruded plastics. For the office furniture industry, Alexis says new designs for wall partitions, wall coverings and wall tiles are incorporating needlepunch technology in order to enhance sound dampening in the work environment.

“It is well known that needlepunch with the right density offers great properties for the acoustics, due to the fibrous structure that allows absorbing and dissipating the sound,” Alexis explains.

Texel most recently purchased a new needlepunch line from DiloGroup in 2014, and since much of the output of this line is being occupied, Alexis reveals the company might be looking to invest again sometime in the upcoming years. 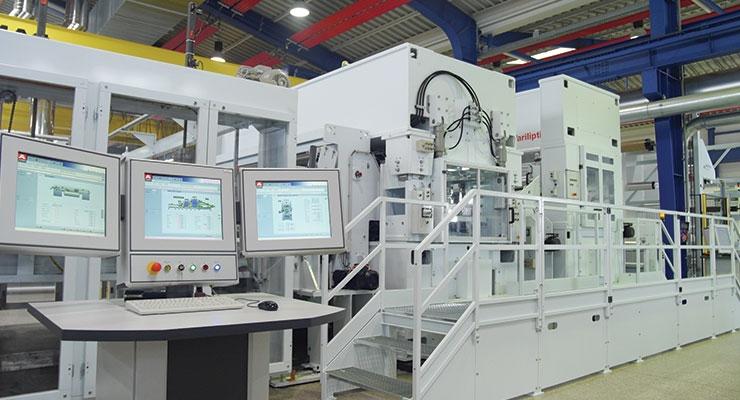 Machinery investments in needlepunch continue worldwide.
(Photo: Autefa Solutions)
Growth in needlepunch, and specifically the automotives market, has also been recognized by the Thrace Group. George Papagiannis, sales & marketing manager, Thrace Nonwovens & Geosynthetics, says needlepunch appears to be growing the fastest in this sector. “The benefits of needlepunch in moldable sound absorption applications, visual floor carpets, and many other areas has more of this fabric going into new car models every year.”

Geotextiles is another key market where Thrace is seeing needlepunch displace other textile technologies. “In the geotextile marketplace, needlepunch nonwoven products continue to be produced at higher tensile strengths at lower weights using the advancements in equipment and processes. This, combined with high flow rates, is enabling needlepunch products to take market share from woven geosynthetics.”

Based on the growing market of needled products, Thrace Group recently invested in a new line serving the automotive, industrial, bedding and geotextile markets. The line is expected to be operational during the second quarter of this year.

Other Investments Around the Globe
J.P. Dilo, general manager, DiloGroup, a manufacturer of needlelooms and complete lines, is optimistic about the rate of investment in needlepunch equipment. He expects his company to supply 15-20 complete lines annually to the various segments of the nonwovens and needlepunch industry including individual machines for modernizing the technology, from fiber preparation through web forming and needling.

Jean-Philippe Dumon, sales director of Andritz Asselin-Thibeau, a supplier of complete solutions for needlepunch technology, adds, “We have noticed that nonwovens producers are investing in new equipment in order to respond to the increasing demands of nonwovens users in the market.” In addition to new lines, Andritz can also upgrade a customer’s existing equipment with its ProDyn system, which allows raw material savings and ensures a better web profile, while its IsoProDyn system helps to further improve the product quality for light fabrics.

“With the proposed expansion of a new Andritz nonwovens line and its peripheral equipment, we aim to be the ‘one stop shop’ of nonwovens for the automotive industry,” says Ankit Desai, director, Autotech Nonwovens. “With the new line we will focus more deeply within the automotive segment to offer the entire gamut of NVH and interiors solutions to OEMs in India.” Desai adds the company will also expand business development efforts into other products and geographies for filtration, coating substrates and geotextile applications.

Meanwhile, Fibertex Nonwovens of Aalborg, Denmark, has also capitalized on growth in needlepunch and its key markets by making recent investments in South Africa and the Czech Republic. The company also entered the North American market early last year through the acquisition of NonWoven Solutions, a maker of needlepunch nonwovens.

Last year the company increased its ownership interest in Fibertex South Africa, co-founded in 2010 and jointly owned by Fibertex Nonwovens, The Investment Fund for Developing Countries (IFU) and the South African company Safyr, from 26% to 74.2% by purchasing the 48.2% Safyr shares, effective March 1, 2015. The transaction included the investment in a second state-of-the-art needlepunch production line, and the simultaneous purchase of the Safyr fiber line, along with additional land and buildings. The IFU kept its ownership interest of 25.8% and invested accordingly.

According to Fibertex, the transaction will create an important platform for the future development of Fibertex Nonwovens in Africa. This is a strategic initiative and Group CEO Jorgen Bech Madsen sees huge potential in having local production in South Africa. Fibertex South Africa has experienced significantly increased demand not only for products for the growing South African automotive industry and infrastructure programs, but also for industrial applications. 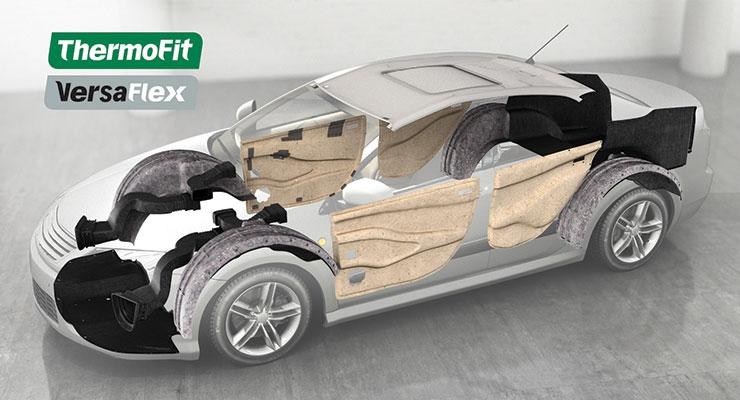 Needlepunch materials are used in many automotive-related applications.


Meanwhile, Sandler, which has been producing needlepunch fabrics for more than 50 years, most recently made an investment in this market in 2013 when it purchased a state-of-the-art production line that employs both needlepunching and air-through bonding technologies. Gerhard Klier, sales director technical products at Sandler, says a wide range of nonwoven roll goods and panels for a number of applications are produced on this line, by using either of the manufacturing technologies or a combination of both. When Sandler began producing needlepunch nonwovens over a half-century ago, they were primarily used in cleaning cloth applications, but today the company has been focused on producing the materials for automotive applications and as insulation materials for interior acoustics.

Autefa’s Sylus needle loom with Variliptic drive vastly expands the possible fields of application, Imhof explains. “This technology is at its most effective where the nonwoven structure, the fibers’ staple length and low weights or higher speeds require it. When processing lightweight nonwovens, by needling of spunbonds and processing fragile fibers or glass or carbon fibers, the strain on the fibers is reduced considerably. The needles no longer stop the web during the needling process. They accompany the web movement and even help to transport it.” He adds that this benefit becomes particularly noticeable in the start-up phase, where the web can travel through the needle loom alone without the need for a support web to carry it. “Where weights are higher or compaction is greater, the amount by which the needles are deflected by the material being pulled through the delivery is reduced significantly. This increases the service life of the needles and virtually eliminates the risk of needle breakage.”

One of the companies that is continuously refining the technology of needles is Groz-Beckert, a leading provider of industrial needles, precision components and fine tools as well as systems and services for the production and joining of textile surfaces. Within the needlepunch sector, Groz-Beckert produces different kinds of felting and structuring needles.

Among these is the newly developed felting needle Twisted with twisted working part, which is especially suitable for the production of articles that require high tear forces, the company says. Groz-Beckert’s EcoStar felting needle features an entirely new development in working-part geometry, which can be used in almost all applications where good surface appearance is required. Further, the company’s Gebecon needles offer the ideal combination of good end product surface quality plus the best possible resistance to bending strength. 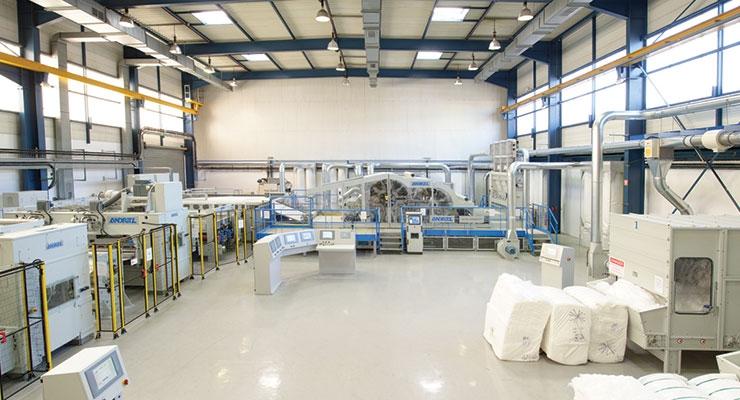 Andritz' NeXline technology features a number of new features.
For its part, Andritz has developed a number of new features and technologies for its neXline range of needlepunch machinery. Among these is D.630, a new high-speed dynamic crosslapper that enables an increase of needlepunch production line capacity, reaching an infeed speed of up to 200 m/min, and a new Zeta felt drafting solution that ensures enhanced fabric dimensional stability and extra production capacity, just to name a few.

“Customers are always asking for more productive needlepunching lines by increasing the throughput and the speed,” Andritz’s Dumon says. “At the same time it is essential to decrease maintenance costs and downtimes.”

Also offering a wide range of innovative technology is DiloGroup. “Any needling technology is offered from our complete machine program in any working width, for any punching mode, for a working width range from 0.6 to 16 meters of working width, with any needle densities ranging from several hundred needles/m/board up to over 20,000 needles/m/board including machines for intensive needling for very high stitching densities up to several thousand stitches/cm²,” says Dilo.

At ITMA 2015 in Milan, Italy, the company launched its latest technologies to the market. “Lately we are introducing a modular technology for needles with up to 22 needles per needle module with new needle patterns for homogeneous stitching patterns over a long range of advances per stroke including new technologies for web forming, carding and crosslapping and fiber preparation,” Dilo says.
Related Searches
Related Knowledge Center