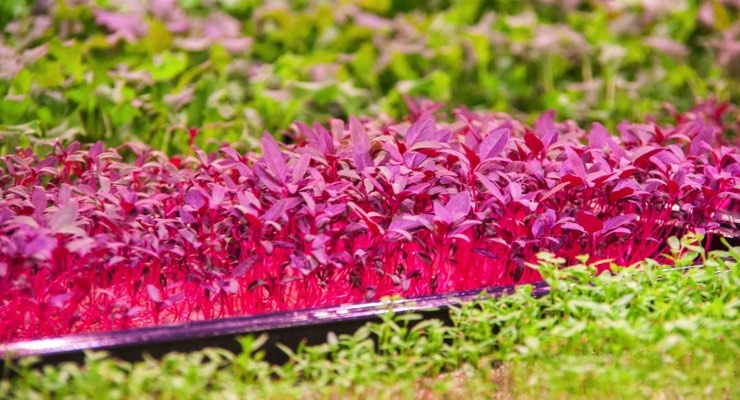 Anglo Recycling Technology is on course to deliver no less than a million of its special nonwoven mats for hydroponically growing herbs to a major customer in the Middle East this year.

The Growfelt-branded products arose from the discovery back in the late 1990s by Anglo Recycling’s owner Simon Macaulay, that the Sussex-based retail supplier of salads, Van Heineken Brothers (now Vitacress), used nonwoven felts on which to grow its cress.

“I drove down to see the company’s production manager, Chris Moncrieff, and discovered they were indeed growing cress on felts, but they were made from virgin materials and he liked the idea of maybe using a blend of virgin fibre offcuts of cotton, wool and polypropylene,” he explains. “That’s how Growfelt was born. For the first six years we supplied exclusively to Vitacress and in return they helped us to bring our factory up to food grade standard and to set in place a testing regime for Salmonella E-Coli coliforms and listeria.”

In recent years, however, Anglo Recycling, which is based in Whitworth, near Rochdale in the U.K., has significantly broadened its customer base. It now offers a core of three growing media products to meet the differing needs of customers across Europe, the Middle East and the Far East, whether for retail presentation and appearance or for water holding.

“As we continue to expand our customer base, we are constantly being set new challenges,” says the company’s managing director Andy Hall. “A customer in the Philippines, for example, wanted a mat 10mm thick, since the ambient temperature in that region demands increased water availability for growing herbs. Our customer in the Middle East is meanwhile seeing the demand for fresh salads increasing significantly and is expanding so rapidly orders have grown from 360,000 pads for all of 2017 to this latest order at the start of 2020 for a million.”

“We’re also undertaking trials to find a fully biodegradable product that meets micro and growth challenges but also allows customers to reduce their landfill costs,” adds Simon Macaulay. “It’s not proving easy, but we’re sure we’ll solve it. There’s already a pretty convincing sustainable argument, with our Growfelt pads allowing herbs for salads to be grown and sourced locally, rather than being flown in from the other side of the world.”
Related Searches
Related Knowledge Center