“Glatfelter is off to a solid start in 2016 as a result of our focus on operational excellence and leadership positions in key markets,” says Dante C. Parrini, chairman and chief executive officer. “Our Advanced Airlaid Materials and Specialty Papers businesses reported operating income increases of 25% and 58%, respectively, compared with the first quarter of 2015, with improved operations and increased shipping volumes. The strong performance of these two businesses was partially offset by lower operating income in the Composite Fibers business, which was impacted by softer demand during the quarter for food and beverage products after a strong 2015.”

Parrini adds, “Glatfelter is fully committed to building upon our market leadership positions across all of our business units. To accelerate our growth as a leading global engineered materials company, we have been making select, strategic investments – including a new, state-of-the-art Advanced Airlaid Materials production facility in Fort Smith, Arkansas, which is expected to be completed in late 2017. Our airlaid business continues to grow with key customers in the feminine hygiene, adult incontinence and specialty wipes markets.” 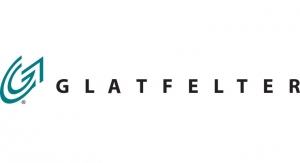