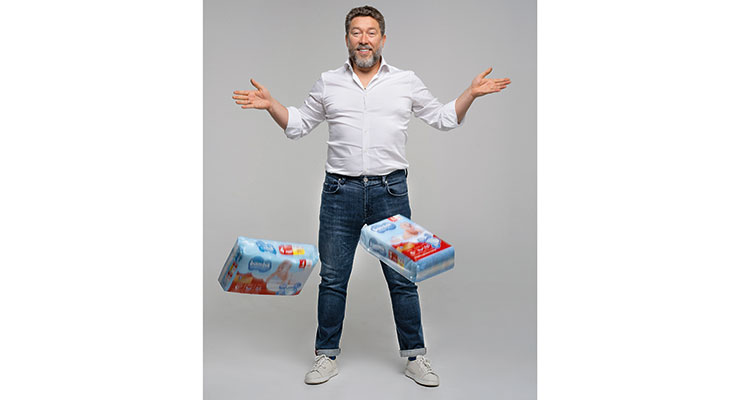 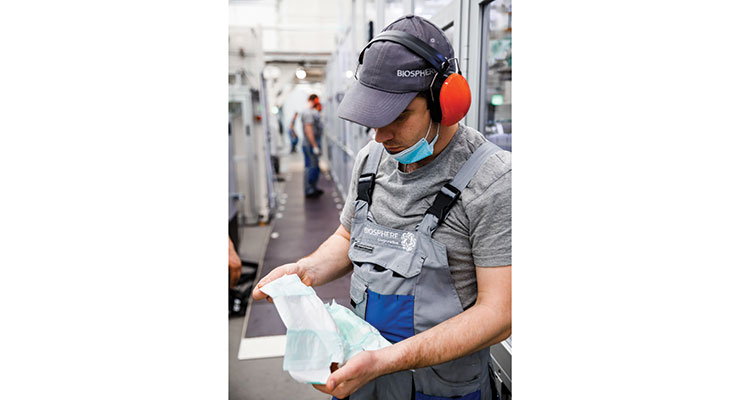 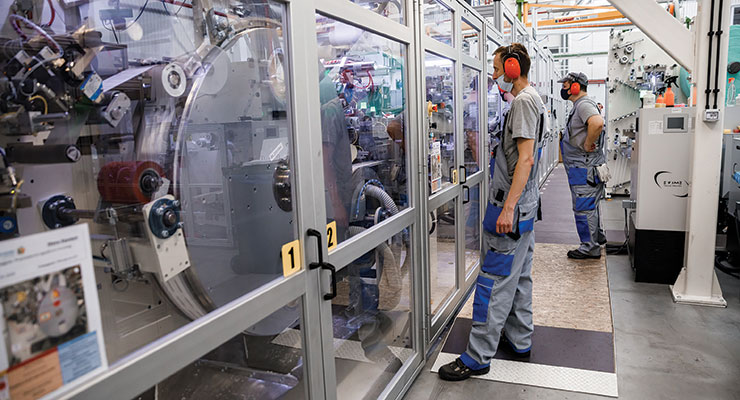 The Biosphere Corporation located in Dnipro, Ukraine, has been growing fast since its foundation as a domestic cleaning goods distributor in the late 1990s. It is now a large manufacturer and supplier of hygiene products, making and delivering around 1.3 million items per day. The latest addition to its hygiene products offering is baby diapers, made on a production line supplied by Andritz Diatec.

Starting out as a local company in 1997, Andriy Zdesenko founded the Biosphere Corporation as distributor of international products in hygiene and domestic goods, supplying diapers and feminine hygiene products for well-known international brands. With a headcount of just 15 people, the focus at the time was to concentrate on the supply of all household and cleaning items including aluminum foil, sponges and wet wipes. At the same time, Zdesenko was working on a plan to become a major manufacturer of hygiene products, seeing the potential in Ukraine, but also in other export markets.

Fast forward to 2021 and the Biosphere Corporation now manufactures and supplies more than 2000 different items of household and hygiene products to the domestic market and exports goods to more than 30 countries. The company ‘s annual turnover is approximately $250 million and it employs approximately 3000 people at five locations.

As part of his plans for Biosphere Corporation’s expansion, Zdesenko was determined to become a leading baby diaper manufacturer and supplier in Ukraine. He says, “It was my ambition to do this, as it had been at the back of my mind for a long time, but there were other manufacturing plans that got in the way, including investing in spunlace production. We are also the leading producer of wet wipes in Ukraine today, and we expect to start production of spunlace in the second part of 2021.”

A Proposition for a Baby Diaper Line
At the end of June 2019, an opportunity arose to enter the baby diaper market when Luca Capriotti, area sales manager, Andritz Diatec, contacted Zdesenko with a proposition for a new line. “We had known and communicated with Luca for some years before Diatec became a part of Andritz Group, during different expos on potential projects. At the same time, we went forward with Andritz equipment and service through our spunlace production. Then, when we began to look again at a diaper line, we realized that Diatec had become a part of Andritz as well.

For the meeting, Zdesenko came armed with a series of requests; the plan was to produce a sophisticated product for babies that was of top European quality, while at the same time offering high value for money. Andritz Diatec examined the details and the data on a micro level and came up with a tailormade solution, specifically for the market in Ukraine.

“What I have always liked about Andritz is that it has reliable management and a culture of innovation. In the modern world, top service and innovation always come first, particularly for us as a new player in certain products and markets.”

Diaper Production—A Complex Operation
Capriotti says, “There is a lot of different aspects involved in diaper production, for instance there are 16 different types of raw material needed. Then there were the market parameters to consider, sizes, weights, qualities.

“We took all in all the requests of the Biosphere Corporation, at the same time as digging deep into the data of the marketplace and product specification and came up with a tailor-made design and a that was completely fit for purpose.”

“We learned very early about the complexity of baby diaper production from Andritz Diatec,” adds Zdesenko. “We are talking about a highly developed sandwich involving many kind of different raw materials all going through the line at high speed. There should be no waste, top quality, and at maximum efficiency. If you get any of these wrong, you lose reputation and lose money.

“And at the same time you have major, experienced international competitors who are already supplying a competitive market. It is a very brave challenge, and a reliable partner is vital.”

Along Came Covid-19
The official contract for the new open baby diaper line was signed on July 23, 2019, and a new, purpose-built factory was constructed. The project of preparing and installing the new open baby diaper line went according to plan over the space of the next seven months, leading up to March 2020, when commissioning and start-up of the line was planned to take place.

The equipment and Andritz Diatec technicians arrived in early March for the installation and start-up phase of the project, and just one week after the Covid-19 pandemic struck. With Italy’s borders fast-closing, it meant that the technicians had to leave Ukraine just as the vital part of the project was beginning.

“This was a real challenge,” says Zdesenko. “We quickly formed a plan using our very experienced Biosphere Corporation production experts, along with online support from Andritz Diatec.
“We were fortunate to have our Head of Diapers Production, Robert Dreja onsite at the Dnipro site to make sure that everything could continue as planned. We utilized every kind of communication platform, using video and audio so that Andritz Diatec experts could speak to our technicians live as they prepared the line for start-up.”

The new baby diaper line started up on time and on schedule despite all the challenges of Covid-19 in April 2020, “We had the usual teething problems associated with any start-up, but we were delighted with what we achieved, particularly in the middle of a pandemic,” says Zdesenko. “I am proud of the production team at the Biosphere Corporation, and pleased with the professional management and remote technical support given by Andritz Diatec.”

The Biosphere Corporation donated the first 300,000 diapers it produced on the line to charities supporting families in need, single parents and public hospitals across Ukraine as the pandemic hit.

The Most Modern Facility in Ukraine
The corporation now has the most modern facility in Ukraine for the production baby diapers on a line that will produce 600 diapers per minute of top quality. Capriotti says, “The type of product the Biosphere Corporation can produce with this line is equal to the top products in any developed market allowing the company to expand in the Ukraine as well as to other international markets.”

Zdesenko says,“We are now delivering our diapers to all territories in Ukraine, and we are starting production of private label products for the local market. We also have our own brand, Bambik, which is making a mark in the biggest discount stores and well as in ecommerce offerings.”

Future growth plans for the Biosphere Corporation include a facility for the production of raw materials for its own products and there are additional plans for five new lines – three baby diaper lines including pants, and two lines for feminine products. The company is also looking to move into tissue production at some point in the near future.

“We have already identified all the locations for the new lines and will be starting them up in the next two to three years,” concludes Zdesenko.
Related Searches
Related Knowledge Center