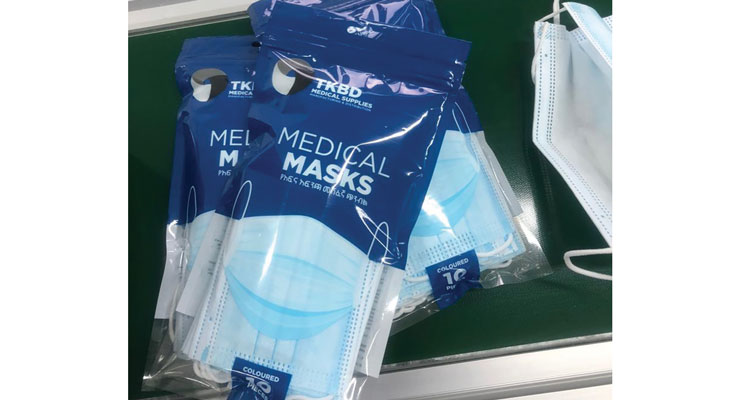 If you hear that there is a new mask machine being installed somewhere in Africa, it would be very much expected in the new normal caused by the Covid-19 pandemic. In fact, a lot of that is already happening. Mask machines of varying capacity are being installed in the region to meet the new demand for face masks. But news that there are plans to install a new meltblown line in Ethiopia in the next few months could certainly raise eyebrows. That is because there are not many nonwoven raw material lines outside Africa’s key hubs of Egypt and South Africa. Egypt, South Africa and Nigeria are, of course, key nonwovens markets and the key players there are Procter & Gamble and Kimberly Clark (the global No. 1 and 2 makers of diapers) and in the case of Egypt, also Unicharm and Hayat Group (the global No. 3 and 5 largest manufacturers in diapers respectively).

In line with the expected “follow the customer” strategy, the big nonwoven raw material suppliers have also set up shop in these key hubs. Big nonwoven raw material suppliers like PFNonwovens have production plants in both these key African markets. Fibertex Nonwovens and Spunchem both have production plants in South Africa. Spunchem is the only one that manufactures meltblown, but its output is largely targeted at the automotive and industrial markets—not masks. Despite the market size, there is no local raw material supplier in Nigeria. BASF, a global giant in chemical innovations and a supplier to manufacturers of nonwovens, is present in Nigeria and West Africa but is more involved other categories like skincare and cosmetic formulations, in a very successful follow the customer strategy.

But, there is a new player in the market. TKBD Medical Supplies is in the late stages of installing a meltblown line for the production of masks in Ethiopia. The same company has just produced its first batch of face masks in September and decided to start making meltblown after realizing how difficult it is to find meltblown in the area, according to Captain Elias Ketema, joint managing director of TKBD Medical Supplies.

Captain Elias, a captain and a pilot instructor with Ethiopian Airlines, owns TKBD with his wife Tseday. The husband and wife team already operate three successful businesses —a chain of premium coffee shops, three five-star Italian restaurants and an agro-processing business in Ethiopia. This is their first venture into nonwovens. They are in discussions with European and American meltblown manufacturers as well as potential investors in this much-needed project. In the third week of September, Captain Elias was in the U.S. on business and took the opportunity to tour the factory of an American meltblown machine suppliers.

Their current businesses employ about 1800 people. So when lockdown happened the business was obviously heavily affected. Captain Ketema says, “I realized that the three options being advocated to fight this invisible threat was face masks, hand sanitizers and social distancing. There was a major shortage of masks, of course. My wife and I started looking into what we could do to help. Then TKBD was born. And when we realized the acute shortage of the raw material, the nonwovens agenda kept growing and here we are, a few months away from installing East Africa’s first meltblown line. And [in September] the first face masks came off our own production line. In fact we will be able to absorb between 5-10% of our own meltblown at full production.”

TKBD Medical Supplies has plans to export to the rest of the continent and further afield. He went on to say, “We are aware that the pandemic is a global threat, therefore we are ensuring that our manufacturing standards meet the key global market standards such as the EU, U.S. and of course local standards, which have been harmonized in line with EU and U.S. standards.”

Well Positioned for the Challenge
Ethiopia is a key African market. With 110 million of Africa’s 1.3 billion population and a GDP that has grown in the double digits for the better part of the last two decades, Ethiopia is a good market to launch a meltblown line. Global players that have ventured into the nonwovens space in Ethiopia, such as Ontex, says investment in the country has paid off. Ontex is the first global manufacturer to open a diaper factory in Ethiopia.

This move by TKBD Medical Supplies will greatly help with Africa’s preparedness to fight Covid-19 and also the near-sourcing strategy that will ease the supply chain bottlenecks and shorten the lead times. It will be interesting to watch how Africa’s nonwoven sector will react to the pandemic in the short and medium term. Also interesting to note is that Wemy Industries, one of Africa’s oldest nonwovens manufacturers that installed the first diaper production line, an Italian made line in the early 1980s, way ahead of P&G and Kimberly-Clark, has just commissioned its first face mask machine. It is good to see that Africa’s home grown businesses are making strides to face the pandemic head-on.