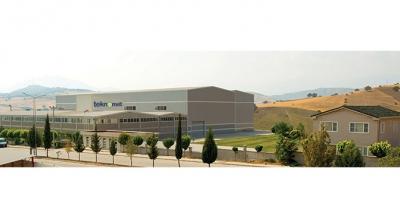 Teknomelt makes nonwovens for hygiene, medical, agro, bedding and furniture applications.
Turkish nonwovens producer Teknomelt was established in 2009 to provide services to the technical textiles and nonwovens industries. Teknomelt conducts its operations at an 18,000 square meter facility in the city of Kahramanmaras in the southern part of Turkey. The company operates both domestically and abroad with its three nonwoven production lines.

Teknomelt’s entrance into nonwovens began after the Turkish government signed the Kyoto Protocol in 2008. At that point, Teknomelt decided to make an investment to produce environmentally friendly products. “Turkey is a great location for supplying these kind of products to the European countries,” says S. Ziya Gumuser, general manager, Teknomelt.

After considering many ideas, the company decided to produce nonwoven sorbent products. Teknomelt first started its nonwovens production with a meltblown line.
Teknomelt’s production of polypropylene (PP) meltblown nonwovens began in 2010. The company’s meltblown fabrics and products are used in filtration, automotive, medical and sorbent products for industrial and environmental cleaning.

A year later, Teknomelt invested in a PP spunbond line to increase its product range, capacity and to serve more markets with alternative products and to be able to produce off-line composite fabric production with meltblown and spunbond.

In 2012 and 2013, additional composite production and some off-line applications were set-up and necessary capacity increasing upgrades were adapted to its meltblown and spunbond lines.

Teknomelt built a SS/SMS/SMMS production line in 2014 to serve the hygiene and medical markets with increased production capacity. “Together, with this new line, Teknomelt also established a whole new laboratory to follow production quality,” Gumuser comments.

“Teknomelt is very young company, so we thought very seriously while entering these tough markets,” he explains. “Because, if you enter a current market, you have to do something different from your competitors to be noticed.”

Teknomelt differentiates itself with its quick deliveries, its flexibility for customers who seek low quantities, its competitive prices, its continuous investments and its ability to conduct new trials for customers, Gumuser says.

To continue its path of growth, Teknomelt has participated in all INDEX and Techtextil trade shows during the past five years. “It is a really good opportunity to meet with current customers and new contacts. We also introduce our new products and new technologies at these fairs,” he says.

Teknomelt also earned an accolade this year when the AllWorld Network and the Economic Policy Research Foundation of Turkey (TEPAV) ranked it No. 31 among the top 100 fastest growing companies in Turkey.

While Teknomelt has made several investments since its inception, the company has put off investment this year due to the struggling economies in the world, and the euro’s devaluation against the U.S. dollar. Gumuser says he hopes to restart the company’s investment projects in 2016.n
Related Searches
Related Knowledge Center