Feminine hygiene and adult incontinence segments expected to drive airlaid into the future.

Due to the lack of investment in airlaid during the last few years, as well as lines shuttering, the global airlaid market has been described as tight by industry observers. But with the growth of the feminine hygiene market in developing countries and the rapid rise in the aging population in developed countries—leading to more users of adult inco products—airlaid could see greater demand in the future, which could encourage expansion among airlaid producers.

According to a recent study from Smithers Apex, the current $1.64 billion airlaid market is expected to grow at an annual growth rate of 4% to reach $2 billion by the year 2020. Airlaid’s key markets—feminine hygiene, adult incontinence, wipes and food pads—are all growing and demand in these markets is strong, the report says. It also states that North America’s supply is the tightest globally, at nearly 95% utilization, with the continent even importing some airlaid from Europe, which has some leeway at 87.5% consumption. Utilization in Asia—“the fastest growing major region” for airlaid—currently stands at 90%.

Industry consultant Phil Mango sees global capacity as the airlaid industry’s biggest challenge. “There’s a little bit of a shortage and it comes and goes,” he says. “A year or two ago, the shortage was so tight that there was no airlaid to be had. Now, because Europe is sort of in a ‘mini recession’ and their demand for airlaid has weakened somewhat, there’s a little bit of a capacity around in certain regions of the world.”

The airlaid market has always gone through boom and bust cycles, he adds. “Occasionally there’s no airlaid capacity around, the prices go way up and nobody wants to do any product development work with airlaid because there is not any airlaid to be had, so they go to other substrates. Then, the airlaid companies react, and they overreact, and everybody builds airlaid lines.” 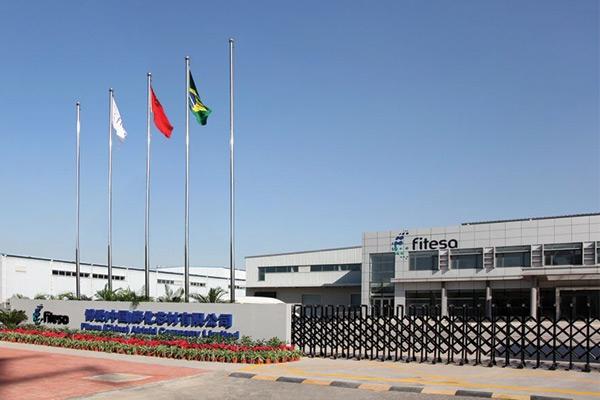 Fitesa operates a two-line airlaid plant in Tianjin, China.
This brings him back to 2001, when just about every airlaid company, as well as others that had never made airlaid, expanded. At this time, the industry added about 100,000 tons of capacity to a total of 300,000 tons, which resulted in a bust. “Prices dropped to nothing, big airlaid companies went bankrupt, like Concert at the time, and Buckeye was really close for a while and had a huge debt load,” he recalls. “So I’d say the biggest challenge for the airlaid industry is managing capacity globally.”

The newest airlaid lines that have come onstream are Selcuk Group’s Karweb line in Gaziantep, Turkey, in 2013, and McAirlaids line in Virginia in 2011, which was a transplanted and modified older line, Mango says. Both are small lines, producing just 7000-7500 metric tons annually.

Regarding the top two airlaid producers, Glatfelter and Georgia-Pacific (G-P), the biggest headlines in recent years were Glatfelter’s 2010 acquisition of Concert Industries—Glatfelter added a third line in Europe soon after the purchase—and G-P’s acquisition of Buckeye Technologies in 2013.

“Georgia-Pacific has about 17% of the market and Glatfelter has 16.4%, but (the difference) goes up and down a little bit depending on capacity,” Mango comments. “Glatfelter sort of has been debottlenecking, meaning they’ve added small quantities of capacity, not new lines necessarily, so whether they have caught up to G-P or not...it’s very close between those two.”

Meanwhile, EAM Corporation, a producer of airlaid absorbent core materials for the femcare, adult incontinence, baby care, food pad, puppy pad and healthcare markets under the patented NovaThin brand, has been expanding its competencies since its acquisition by Domtar in May 2012. Prior to the buy-out, EAM was funded by a private equity, Kinderhook Industries, and was also previously owned by Rayonier.

According to Lori Venn, EAM’s vice president of sales and marketing, “EAM has become a key part of Domtar’s R&D program for its personal care growth strategy. The upgrades to our facility, and investment in people, assures not only our growth, but our continued success in the airlaid industry.”

While EAM hasn’t revealed any plans to add airlaid capacity, Venn doesn’t hesitate to say the company will if the right opportunity presents itself. And not just in the airlaid absorbent core market. “We are always looking for ways to expand, including into other technologies, as we enhance our product base for both our internal and external customers,” she says.

Meanwhile, Swedish producer Duni has narrowed the focus of its airlaid business. In February 2013, the company announced it would exit the hygiene business but remain involved in tabletop. After failing to find a buyer for its equipment related to this market, Duni announced in September 2014 that it would concentrate its entire Rexcell airlaid business in Skåpafors, Sweden. This past July, the company announced that all of its remaining production in Dals Långed was transferred to Skåpafors and conversion of these assets to tabletop lines was complete. When announcing its second quarter results, Duni said that this project would be fully implemented in the fourth quarter of 2015.

Over in China, nonwovens producer Fitesa, which runs two airlaid lines in Tianjin, doesn’t have any current plans to add more airlaid capacity, but the company continues to develop new products in this segment.

According to Marc Newman, Airlaid PPD and engineering manager for Fitesa, some of its latest airlaid products include composite structures that combine airlaid with other nonwovens; a water dispersible dry wipe made of 100% environmentally sustainable and biodegradable raw materials; and a family of very lightweight airlaid materials designed to improve fluid handling of disposable hygiene articles that provide fast intake and distribution of fluids. “Upstream developments are in the works that target improved functionality of traditional airlaid applications including absorption capacity and retention, advanced odor control concepts, and unique additives that enhance the fluid management of specifically targeted fluids,” he says.

Femcare’s Future with Airlaid
Industry insiders and airlaid producers agree that the growth of feminine care in emerging markets, where penetration is low, is among the factors that will drive the airlaid market forward.

“What’s happening is not only is the demand for feminine hygiene products in emerging markets growing, but the performance of those products in the emerging markets is also growing,” Mango explains. “For example, there are a lot of pseudo-airlaid lines in China, they are sort of small, limited versions of a typical airlaid process. Nowhere near the quality or performance of a traditional airlaid line, but they make a sort of a pseudo-airlaid product and they’ve been going into these really low performance, but still better than previously had femcare products. But now the feminine hygiene consumer in China is becoming more sophisticated. They want Western performance—thin, comfortable, high absorbency products. They no longer want those poor, bulky, leaky type products.”

Because of this, Mango suggests the emerging markets, especially in Asia, will be a big driving force for airlaid.

EAM already supplies femcare markets in Asia. Venn believes these markets, like others, will continue to expand from the sheer population growth taking place as well as availability of higher performing products. When asked about economic factors affecting these markets, Venn responded, “Often in these expanding markets you’re converting customers away from older style products. Economic changes can sometimes lead to considerations to default back to these older styles. But once consumers have thinner and higher performing products, they have a hard time going back.”

Airlaid for the Aging Population
In addition to femcare, the adult incontinence market is also growing globally, according to Mango. “Adult incontinence used to be sort of a marginal market for airlaid because the people who used adult incontinence products 15-20 years ago, or even 10 years ago, were in institutions of some type or they were very inactive, they were at home or were at adult care centers or hospitals, and they didn’t care that they were wearing a big old fluffy product, but nowadays, people are active to much older ages.”

Just like in femcare, where products went from big fluff pulp-based cores to airlaid, Mango predicts the same will happen in adult incontinence as consumers seek thinner, discreet and comfortable products. “I think adult incontinence in general is starting to make a move towards more airlaid and I think that’s going to be a big market that’s going to help support airlaid over the next several years into the future,” he says. 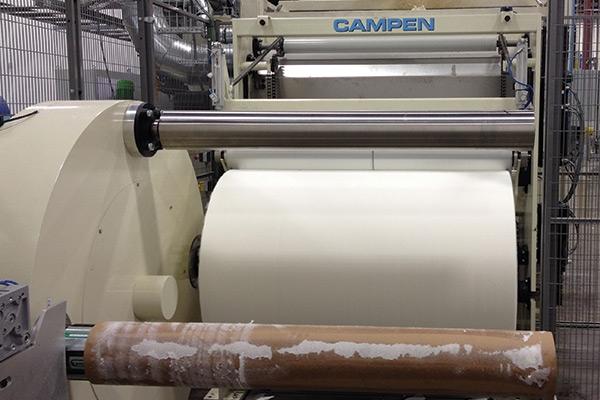 Campen has recently entered the airlaid market.
Dunleavy agrees that the adult incontinence market will grow as populations age. “In developed countries where personal incomes are high, strong growth in incontinence products will occur as we are seeing in Western Europe and North America. The light incontinence products segment may create additional demand for airlaid fabrics,” he explains.

Within adult incontinence, EAM’s Venn says the company has been working on upgrading traditional cores to include airlaid. In fact, they have been making airlaid that are selling into pad-like products in the U.S. and Europe for several years. “We have been developing products to address an anticipated trend (now a reality) of utilizing airlaid in medium/heavier adult inco products.”

Will We See More Airlaid Soon?
Despite the likely demand for airlaid in the future, Mango indicates that it could be some time before a new line emerges in the global marketplace.  “There are only a few companies that could build big new lines and have an effect on the market—Georgia-Pacific and Glatfelter are the most capable, though EAM (Domtar) and McAirlaid’s are possible for hydrogen bonded airlaid,” he says. “Georgia-Pacific probably won’t build a line for a while. Glatfelter is the most likely to expand sooner rather than later. But, first you announce you’re going to build it, then it takes a year to build, and then it takes at least six months to get it up to any kind of capacity. So we’re talking a year and a half before anybody [adds capacity], but no one is starting yet.”
Related Searches
Related Knowledge Center