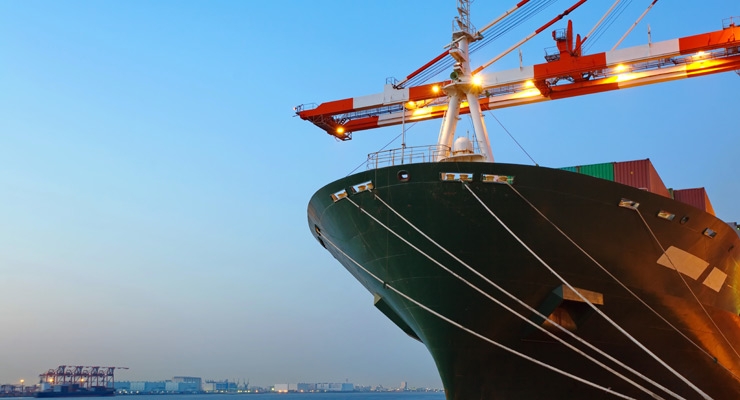 Data from the U.S. International Trade Commission (ITC) indicate that 2010-2014 were strong years for U.S. exports of nonwoven roll goods classified under chapter 5603 of the globally-used Harmonized Tariff Schedule (HTS). In terms of free-alongside-value (FAS) for instance, ITC data show that the total FAS value for all roll goods exported from the U.S. grew from roughly $1.6 billion in 2010 to just shy of $2 billion last year – an impressive increase of nearly 20% over five years (please see Table 1). 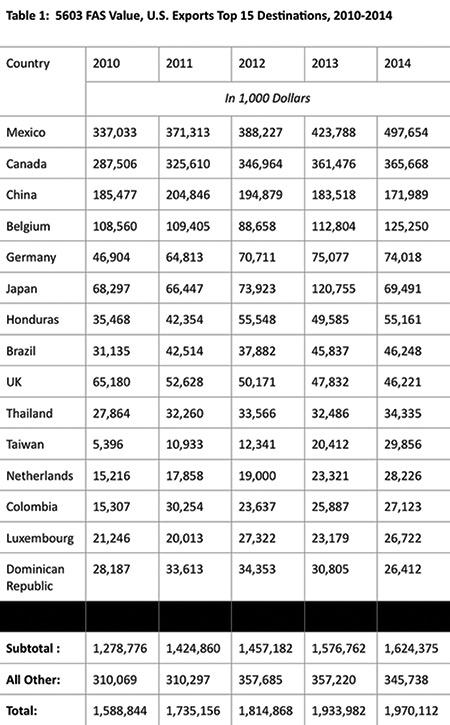 Interestingly, Table 1 also shows that the vast majority of FAS value for 5603 exports was derived from shipments to just 15 countries with exports to Mexico and Canada continuing to account for the largest percentages, which has been the case for at least 15 years.
FAS value is broader than just the value of the roll goods themselves in that FAS is defined as the “Transaction price of the merchandise including inland freight, insurance and other charges incurred in placing the merchandise alongside the carrier at the U.S. port of exportation.”

Realistically, therefore, some portion of the increased FAS values during the past five years could be the result of higher freight fees, insurance charges, and/or other costs getting the goods to a U.S. port, but it’s impossible to tease that consideration out of the ITC numbers.

Unfortunately, it’s also impossible to do an “apples to apples” value comparison between U.S. exports of roll goods to other countries versus the value of imports to the U.S. from abroad because government data for imports is based on Customs Import Value (CIV) instead of FAS.

CIV is defined as the “Price paid for merchandise when sold for exportation to the U.S.” and doesn’t differentiate additional costs for shipment, delivery, import duties, etc.

Instead of comparing the designated values of imports versus exports, therefore, the difference in kilograms (kg) is considered to be a more comparative means of measuring shipments of 5603 roll goods both into and out of the U.S.

As shown in Table III, total kg of nonwoven roll goods exported from the U.S. continues to be significantly higher than the amount of 5603 material coming into the country, but that margin has narrowed quite a bit over the past five years.

by China when measured by kg.

The final table lists the top 10 destinations for nonwoven roll goods exported from the U.S. last year as measured by kilograms instead of FAS value.

Taken together these data provde just how global the nonwovens industry has become in recent years and illustrate how U.S.

dominance over the industry has faded during the past 10 years or so. They also suggest the potential that the Trans-Pacific Partnership (TPP) negotiations offer U.S.-based exporters of nonwoven roll goods. Considering that countries which are part of these negotiations—especially Brunei and Japan—as well as countries which have expressed interest in joining the negotiations but aren’t currently formal parties to the talks –  such as Philippines, Thailand and Taiwan – a successful TPP agreement could offer new market opportunities for U.S. exports of nonwoven roll goods.

Indeed, considering that the U.S. already has free trade agreements with three countries on the list of top 10 export destinations for 5603 roll goods, a TPP that opens up five new markets to duty-free exports from the U.S. could be quite helpful over time.   But these will definitely be competitive markets that other countries in the TPP negotiations will be watching carefully for their own export opportunities.
Related Searches
Related Knowledge Center