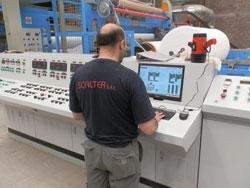 Scalter is one of the smallest nonwoven companies in Latin America and the only one who produces several product types. The Buenos Aires, Argentina-based company makes about 950 tons of nonwovens per month, significantly higher than the 30 tons per month it made in 1995 or the 250 tons in 2008.

“We are proud of the space we occupy as a small company competing against larger multinational groups producing more tonnage,” said Luciano Hutin, sales manager. “Larger players focus on their product portfolios foremost, so that the customer chooses what it wants. But we listen to the client to know what they need specifically. This subtle difference is the key to our success. We know that we cannot respond to large buyers in the industry, but we can serve the companies that large producers cannot or will not attend to.”

Scalter was first established in Buenos Aires in November 1950 when it began making woven fabrics for wool interlinings, which had been traditionally made in the U.K., but was devastated by World War II. Soon this operation grew to 100 looms and in the 1970s the company diversified into chemical bonded nonwovens, becoming the first company in Argentina that made nonwovens exclusively for interlinings.

At first success in the nonwoven interlinings market was difficult for Scalter, according to Hutin, who says competition with multinational producers and other economic difficulties negatively affected growth. This led executives to look to Europe for machinery technology and in 1979 the group bought a chemical bonding line at ITMA, a move that marked a major change.

“We stopped being affected by recurring crises in the garment sector and began to amass a fundamental concept that still guides us today,” Hutin said. “We work to give the customer the product he needs—about the parameters—to restart the growth process.”

In 1995, Scalter diversified into thermal bonded polyester and polypropylene nonwovens, which allowed the company to move into a number of new markets. This move proved so successful that in 2007 the company moved into spunbonded nonwovens. At the time, this Italian technology was still considered novel in the region.

The next step in the company’s success came in 2011 when it bought a more modern spunbond line which has allowed it to target hygiene, medical, filtration, mattress and agriculture markets.
“In 2011, we bought a spunbond line—the most modern in the country and the region—offering unique variables,” Hutin said. “This allows us to talk as equals with any other manufacturer in the world and continue to think, once again, of the future.

Scalter’s spunbond, or SB, is sold in a number of markets thanks to its many benefits. In addition to being inexpensive, it’s available in many colors, weights and widths, and offers lower inertia and flexibility. “We sell the product to some of the same clients we have had for generations,” Hutin said. “Whatever the product that the client needs, we have—if not, we create it. Our slogan is: ‘de personas para personas’ or  ‘from people to people’.”

Additionally, the company’s latest machine can make meltblown pure or combined with spunbond, allowing Scalter to add value. “We can stamp the fabric across its width in four colors,” said Hutin. “In short, we can expand the palette of the painter so that customers no longer need to set limits to your imagination.”

Now, the company is considering where to invest next. Should it be a new polypropylene spunbond line or a new technology that allows it to target new markets and new customers? This decision will likely be made at the IDEA show in Miami next year.

“Our difference against the competition is very simple; think what the client needs and create it,” Hutin said. “As family-run business it helps to make quick decisions without bureaucracy or the need to hold big meetings. It’s just us, our family. Like Athens for the Athenians during the Greek Empire, every member of the family thinks the same. The most important thing is the company.  Our life, our past and our future is the industry.”
Related Searches
Related Knowledge Center