But government sanctions could halt growth in Russia, the region’s largest market.

The market for nonwovens in Eastern Europe continues to grow, driven by increased demand for hygiene products in countries like Russia, Poland, Czech Republic and Slovakia. This demand has led to investment among nonwovens producers including Union Industries, an Italian manufacturer who recently pledged to build a spunmelt line in Poland, and Avgol, who is currently adding its second spunbond line in Russia.

Outside of hygiene, Freudenberg Politex, Fibertex Nonwovens and Johns Manville have all committed to the region, attracted by demands created through infrastructure improvement projects as well as a low-cost, yet educated and skilled, workforce.

According to Euromonitor, the diaper market in this region is largely dominated by Procter & Gamble, who holds a 57% share in Poland, 34% in the Czech Republic and 37% in Russia. P&G’s dominance was won through its strong global reputation for Pampers, effective marketing support and a wide distribution network. Additionally, P&G offers a range of products, and Euromonitor is finding that as economies improve more, Eastern European customers are trading up, opting for premium products instead of value.

However, growth is likely to be constrained by a decline in the birth rate, which began in 2013. Despite this, growth is expected to continue thanks to rising household penetration and a growing focus on hygiene and convenience. This trend will be encouraged by ongoing growth in disposable income levels and a further rise in the percentage of working mothers.

Russian Growth
According to Nonwovens Industry correspondent Eugene Gerden, the Russian nonwovens industry is growing, reflected by the increasing volume of domestic production as well as the launch of new investment projects. During the period of 2007-2012 the volume of nonwovens production in Russia increased by 7.6% to 2.4 billion square meters. 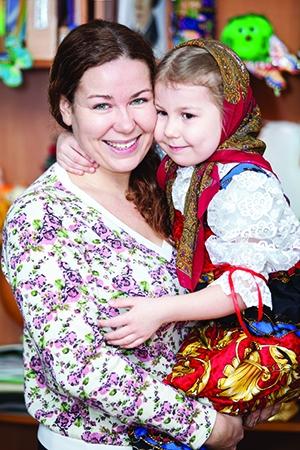 As more women enter the workforce in Russia and Eastern Europe, demand is growing for disposable diapers.
Euromonitor’s Ian Bell also points to Russia as a prime growth area for nonwovens. While it is the largest Eastern European market, dominating hygiene sales with $3.1 billion in 2012 (50% of regional value), it is also something of an archetypal developing market. Value growth has been rampant, reported at over 10% during the last five years, while Western Europe has struggled to climb above 1% over the same period.

Growth has largely been driven by the Putin-era raw material-fuelled economic boom, which has stoked a rapid rise in disposable incomes—doubling between 2008 and 2012—to $8000, placing Russia in a rapid growth phase for hygiene category development. While the key disposable income driver is in place, the Russian market has attracted still more attention due to its relatively low hygiene penetration rates. This has encouraged inward investment in terms of plants and technology.

These positive socioeconomic factors have triggered a surge in expenditures between 2007 and 2012, when the nappies/diapers market grew by $1 billion, with only China and Brazil able to demonstrate more rapid growth over the same period. Russia’s diaper boom is not simply explained by an upward shift in the birth rate, as the category has also moved more upmarket, correlating with growth in the number of middle-class women having children later in life, especially in Moscow. Much of this growth has been put down to government intervention, concerned with a looming ‘demographic crisis,’ which has begun programs to encourage Russians to have more children.

The most important of these ‘mother’s capital’ involves a payment of 365,000 rubles ($13,000) for mothers having a second or third child. The money can be invested into a mortgage, child’s education or the mother’s pension fund. By comparison conditions in Western Europe couldn’t be more different with birth rates on the decline for the most part and have been reported as low as eight per 1000 people in Germany with only France and the U.K. matching Russian levels.

While belt-tightening in Western Europe has increased demand for cheaper products, Russia has been moving in the opposite direction. There has been a notable shift to added value and this has suited the positioning of Western brands illustrated by consistently strong growth posted by Pampers and Huggies. Much of this demand is associated with growing numbers of women in their mid-30s and 40s having children.

For very similar reasons to nappies, sanitary protection in Russia has also made some significant progress in terms of value sales, seeing double-digit growth. This is in spite of the number of women ages 14-54 stagnating; the category has seen even some volume gains made on the back of widening use of panty liners, but most significantly it has been driven by ‘premiumization.’

Sanitary protection added approximately $250 million of incremental value growth between 2008 and 2012, roughly 20% of total growth for the hygiene industry as a whole. This trend is set to continue, however, unlike nappies/diaper sales, a declining population of suitably aged women in Russia will mean that product development will be key to maintaining premiumization without the help of an upswing in consumers.

Baby wipes in particular and personal care wipes in general remain largely underdeveloped in Russia, and given incomes and fondness for branded goods as well as convenience, this should be a category to watch. Also in the longer term, incontinence will be a key development category, although there is much work to do to introduce this product category as a normalized part of retail and break many of the social taboos associated with this product type.

In both cases, there is a clear need for investment in consumer education and product promotion in order to break open this untapped potential, which will grow as disposable incomes climb to and beyond the $10,000 mark by 2020.

Potential Road Blocks
Growth in Russia could soon by stymied by a proposal, by Vladimir Putin, to ban all imports of nonwovens as well as equipment used to make nonwovens from Western European countries in response to a new package of sanctions, which was recently imposed against Russia by the EU and U.S.

This potential ban has already sparked critics by some well-known Russian analysts in the field of nonwovens and textile industries. According to Valery Hartung, first deputy chairman of the Duma’s committee on industry, imposing such a ban could negatively affect local consumers. Instead, he suggests the government needs to provide additional subsidies and other benefits to domestic producers, maybe via favorable taxes, cheap loans and other supports.

Vasily Goushchin, general director of the textile enterprise cluster association of the Ivanovo region, says any sanctions should be imposed only in specific segments of the market, notably for state and defense contracts.

He added that the ban would negatively affect thousands of small businesses across the country. In the meantime, local producers expect that the imposition of an equipment ban would have even a more severe negative impact on the industry. In recent years, a significant number of local nonwovens producers have announced plans to modernize production facilities and railroad these plans.

However, because of the potential ban, already many Russian textile and nonwovens makers have already suspended placement of orders for the production of machinery and equipment in Western countries. This has already resulted in the almost 40% reduction in volume orders for machines in some EU countries, particularly in Germany (which, so far, has been one of the main suppliers of equipment for the Russian nonwovens and technical textiles industries) during the first half of 2014.

According to an official spokesperson in Nimpromtex, one of Russia’s largest producers of nonwovens, the sanctions have led many local nonwovens producers to fear that Western equipment suppliers will not be able to fulfill their earlier obligations and supply equipment that has already been bought and paid for because European imports could be halted at any time.

Data collected by the Russian Association of Nonwovens Producers show that the current problems in the industry and the ongoing sanctions war between Russia and Western countries will likely result in the decline of the domestic market of nonwovens this year. Last year the market size reached 2.6 billion square meters in volume terms and there is a possibility that these figures may significantly decline this year.
Related Searches
Related Knowledge Center