Ah-choo! The Sneeve Catches Germs from the Vampire Sneeze 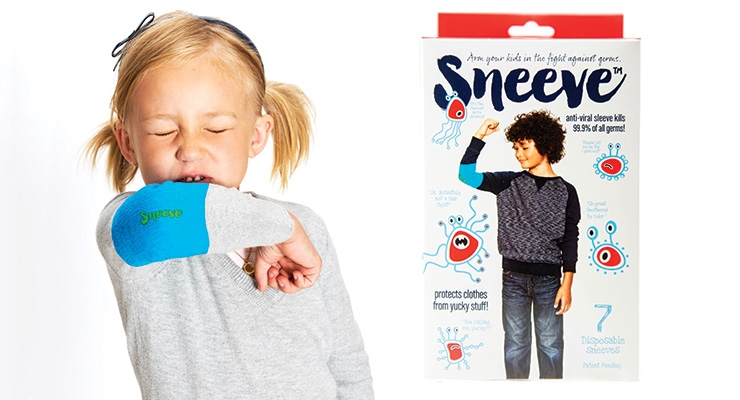 The latest generation of kids has been taught at school to cough and sneeze into the crook of their arm—also known as the vampire sneeze—when a tissue isn’t available, and rather than covering their face with their hands. But a father and son from New York recently came up with an idea to prevent the spread of germs even further, with an antimicrobial-treated nonwoven “sleeve” that goes over the crook of a child’s arm—The Sneeve.

The Sneeve is a soft, stretchy, absorbent little sleeve that kids wear over their arms, shirts, sweaters, sweatshirts or pajamas to catch the “yucky stuff.” Each disposable Sneeve can last from 12-24 hours and absorbs phlegm and mucus from reaching a child’s clothing. The antimicrobial application—4.846% citric acid and .003% silver—kills 99.9% of viruses and bacteria on contact.

Nicholas Bratskeir, one of the co-creators, says his father Stan first thought of the idea two years ago when his grandson Chase, Nicholas’ nephew, saw Chase sneeze into the crook of his arm. “This is something my generation was never taught, and my father’s generation was definitely never taught,” Bratskeir recalls.

After learning the reason why Chase was sneezing into his arm, the idea—and the word Sneeve—popped into Stan’s head. “We thought, this could actually work. From the inception, we thought about how this would fit on a kid’s arm, we thought about it going over someone’s clothing, what it would need to be treated with, what the material would need to be made of so that it wouldn’t scratch a kid’s face, and it came to be something that was real,” Bratskeir says.

Bratskeir and his father searched high and low for the right material, which resulted in a spunbond nonwoven made in the USA. “It’s a proprietary nonwoven fabric and it was one of the most difficult pieces about creating this product,” he says. “There are so many nonwovens out there, especially ones that are made in China that look exactly like the product you want, but then when we got a swatch of it we realized it’s nothing close to what it looked like online or how it was described. Our nonwoven has a characteristic that allows it to stretch in one direction, and it has a good amount of stretch so that it can fit kids from ages three years old to eight years old.”

Among the advantages of the Sneeve is that it enforces good behavior for kids, he explains. “Most kids aren’t going to school with a box of tissues or hand sanitizer in their backpack, so to build on the behavior that kids are already taught in schools, and to really enforce that behavior with the Sneeve, we feel that it’s a win-win situation for parents, for kids, and for us too.”

The Sneeve is currently sold on www.thesneeve.com, retailing for $9.99 for seven. It is expected to be available at a major national retailer early next year.
Related Searches
Related Knowledge Center