Sintered & Heatable Nonwovens: the next hot things in nonwovens 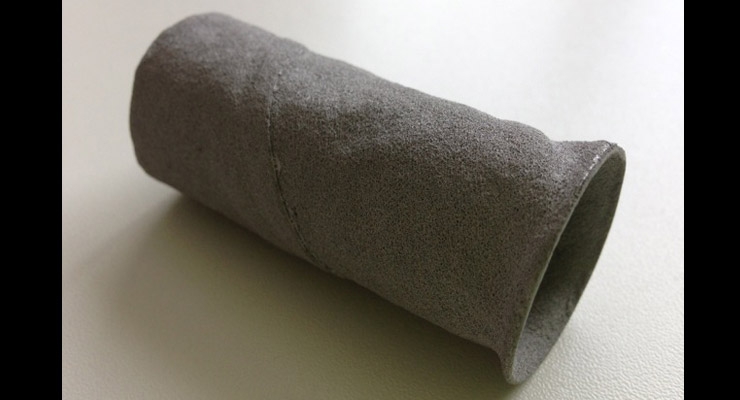 Nonwovens producer Norafin Industries of Mildenau, Germany, has been hard at work researching and developing new technologies for everything from filtration to clothing, and at this year’s Techtextil 2015 in Frankfurt, Germany, the company offered a glimpse of its latest creations—sintered nonwovens and heatable nonwovens.

Sintered nonwovens turn a nonwoven made of PET into a completely metallic material.

According to Marc Jolly, head of Norafin’s R&D department, and Tobias Thiem, an R&D project manager, spunlace or needlepunch can be used for the sintered nonwovens because of their inherent pore structure, and PET is an optimal polymer for the job. “The [nonwoven] material is used as a carrier material for the metallic particles and needs to be burned out during the sinter process. The PET nonwoven will be loaded with metal particles in a wet stage or a dry stage according the metal particles type,” Jolly explains.

“The metal replaces the nonwoven in copying the pore structure of the nonwoven,” Jolly adds.

Sintered nonwovens were originally intended for filtration applications. “With the 100% metal structure, you receive an ideal high temperature filter elements,” Thiem says, adding that the end-result is relatively flexible and can be altered into various shapes.

Norafin is still in the R&D phase so it can continue examining how the sintered nonwoven is performing, but they are working with industrial partners that will be implementing larger scale trials to learn about the processability. Thiem indicates they should be available for commercial use soon.

Future plans for the sintered nonwoven could also include applications such as electrodes or light metallic parts, Jolly adds.

The heatable nonwovens project was a result of a previous long-term project called TeBeWe. “Here we developed a nonwoven which is conductive enough to produce heat when is get supplied with electrically current. At first it was planned to use the heatable nonwoven in molding tools for glass fiber compounds, to heat up the resin in the mold during the curing process,” Thiem explains. But, they realized this heatable nonwoven could be used for other applications.

The heatable web is made of conductive fibers, and the nonwoven is produced with spunlace or needlepunch technology. Metallic fibers are used to get conductivity, according to Thiem.

The heatable nonwovens distinguish themselves through short heating-up times in the low voltage range (U < 48V), low bulk, ease of use, good drapability, and homogeneous heat output and distribution during the heating-up and cooling-down phases. “The heating is realized through the metallic fibers in the nonwoven which get heated up by power supply through Joule heat,” he says. “The temperature can be controlled via the voltage you supply. So higher the voltage is, so higher the temperature you reach.

“The heatable nonwoven is sometimes filling a void for applications in which you are not able to use any other heatable solution or in applications where you search for flexible, homogeneous heating solutions.”

With regard to heatable solutions, nonwovens offer advantages versus other fabrics. Thiem cites clothing as an example. He says embroidered metallic threads, which are considered state-of-the-art, are relatively inhomogeneous and susceptible to damage. “The heatable nonwoven is more homogeneous, flexible and stabile for this kind of application.”

Norafin is also still in the R&D phase for heatable nonwovens, and is currently using information from its findings over the last several years to figure out other possibilities or improvements. “Together with some interested customers we are able to get new opportunities and research of new applications,” Thiem concludes.
Related Searches
Related Knowledge Center