Any parent knows that wiping a child’s face after dinner can end up with a kid in fit. What should be a simple task can turn into flailing arms and tears. That’s why two Colorado moms have come up with a solution to make kids actually enjoy getting cleaned up—flavored face wipes.

Danielle Stangler, CEO, and Julia Rossi, EVP, of TaylorBaby LLC are the co-creators of NeatCheeks, facial wipes flavored with stevia, a natural plant extract. The wipes are also infused with purified water, aloe and honeysuckle.

The idea came along when Stangler was out at a restaurant with her family, including her 18-month-old daughter. Without a baby wipe in hand, she asked her husband to dip his napkin in his drink—which she thought was water—to clean up some mac and cheese off their daughter’s face. To her surprise, instead of what she thought would be a “battle that would cause a scene,” her daughter’s reaction was “Nummy Nummy!” As she soon learned, her husband’s drink was actually lemonade.

And this is how their entrepreneurial story began.

“We came up with the idea about five years ago,” says Stangler. “And then we searched and searched. We typically had the idea of just a basic flavor in a face wipe.” Then, she adds, through research and development and talking to cosmetic companies, they learned stevia would be a great fit for the flavoring component of the wipes. But flavor wasn’t the only positive trait of using stevia—it also acts as a moisturizer. 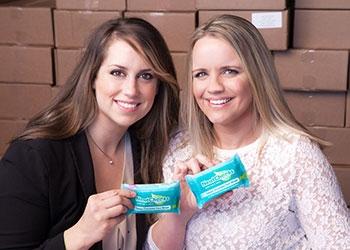 From left to right, Julia Rossi, EVP, and Danielle Stangler, CEO, co-creators of NeatCheeks.
“We have the unique differentiator in our wipes,” Rossi explains. “The fact that we are the first to actually have a real flavor in the wipes—stevia is what gives it the actual flavor component much like lip balm when you wipe it across your lips—but stevia also doubles as a moisturizer, and that’s also the piece of our product—the flavor component and moisturization—that’s patent pending right now.”

Stangler adds that they created the wipes out of necessity. “Kids typically don’t like their face wiped. So we actually use the flavor as a topical solution that leaves a mild flavor on their lips whenever you use them. So now kids actually enjoy getting their faces wiped,” she says. “Most wipes to date actually don’t taste good and they leave a yucky residue on their face, so let’s say you’re removing make up or removing lipstick, [other wipes] actually taste gross, so we have added an additional sensory experience to the wipe as a whole. Typically you have scents, now we have actually included taste.”

After the ladies continued development, fine-tuned the product, and did the necessary testing on the skin—even testing on their own kids to make sure the flavor was just right—they took on some investors to manufacture their first batch of inventory. NeatCheeks launched in regional Walgreens stores in Colorado in February 2014.

Sure to help the moms grow their business was their pitch—and subsequent deal—on the hit ABC reality television show Shark Tank, which aired on April 17. Shark Tank gives aspiring entrepreneurs an opportunity to pitch a panel of successful investors their unique innovations in hopes that they’ll secure an investment in return for a stake in their company. Stangler's and Rossi’s unique wipes were good enough to close a deal with “shark” Barbara Corcoran, an American businesswoman. The ladies received $150,000 from Barbara for a 25% stake in their company, contingent on one thing—that they make a cherry flavor.

“Barbara’s a great marketing partner for us,” Rossi says. “We’ve had the opportunity to work with her a bit on that side of [the business].”

And while the ladies are mum on when the cherry flavor will come out, they indicate several flavors are currently in development to add to their range.

“We’ll be excited to make an announcement when those are formally finished in development and testing is complete,” Rossi adds.

Some other big news in the pipeline is that NeatCheeks will be launching nationwide in Babies R Us stores come September.

“We have a lot of exciting things in the works,” Rossi says. “We’re looking to expand in other vertical markets. The fact that we have flavor in a face wipe allows us to translate to many different segments. My children have eczema, and so having stevia as a moisturizer for a face wipe for children is also very effective.” While they can’t claim it yet, she reveals they’re working on testing for that claim.

Stangler adds, “We’re working on partnerships with some cosmetic companies as well, we can’t name them now, but it’s a way we found through this process that moms enjoy removing their make up with our product.

“It’s really exciting to see how a baby idea turns into a bigger opportunity in vertical markets. Also [using the wipes in] dental offices and places like that because they’re wiping faces all day long. So there are various opportunities that have presented itself along the way, especially because of the Shark Tank effect, that allows us to have a competitive advantage, not only in the patent, but be the first in the particular market.”
Related Searches
Related Knowledge Center